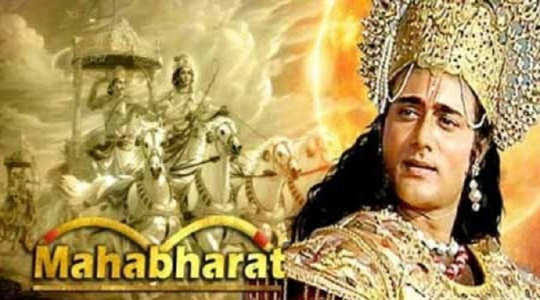 Time eternity speaks about the never ending battle of present n future , and it will be narrated by all Mothers, Rishi’s, Gurus .
At Hastinapur Dhritarashtra is weeping all alone, Vidur comes n tries to console him. Dhritarashtra has no crown adorning his head, he meets Vidur just as his elder brother. As Vidur pays respects n he asks Vidur to leave him alone to grieve. They discuss the battle n grieve some more. Vidur shows Dhritarashtra the mirror , how he failed as a king, failed to follow Dharma, how he was overwhelmed by Putramoh.
Dhritarashtra was weeping for his 100 sons whereas, Hastinapur had lost innumerable of her sons. Every home had lost a few sons. Vidur asks Dhritarashtra to seek forgiveness from Hastinapur for his failures n wrong decisions. He asks Dhritarashtra to look at his antaratma . How he had not looks at future . How his ambition proved such a disaster for Hastinapur .He was now the past  and he better welcome the future, Pandavas had entered Hastinapur, Dhritarashtra should go ahead, Welcome n bless them.
soon They hear Jai Jai kaar of Chakravarti Maharaj Yudhishthira.
Vidur asks Dhritarashtra to wipe his tears, put a smile on his face n welcome the Pandavas .

Both wipe their tears.
Yudhishthira is welcomed along with Pandavas n Krishn. Maids shower flower petals on them .. Yudhishthira asks them to become silent .
Vidur welcomes Chakravarti Maharaj Yudhisthir with joined hands. Vidur asks them to pay respects to Jeyshtha bhrata Shri.

He asks Krishn to meet Dhritarashtra first .
with his Crownless head bowed down, Krishn comes first n pays respects. Dhritarashtra declares he was no more Maharaj, it was Yudhisthir who was Maharaj now. But he still believes it was none other than him who deserved this throne n after him it rightfully belonged to Duryodhan, but he had fought the battle like a Kshatriya n lost the battle .

Yudhishthira comes n pays his respects , Dhritarashtra blesses him as the next Maharaj .. Hugs him .

Kunti gets Pandavas n Krishn to meet Gandhari. They pay their respects to her n she blesses them “Sukhi Raho”

Yudhishthira says they will never forget they had killed Kauravas. Gandhari says they got the punishment for their sins. Dhritarashtra arrives n says the sins were committed by him so he should be punished...and after that he could proceed for Vaanprashta .  Duryodhan asks if they were leaving L? Kunti says u TIL the past leaves the future can’t arrive. Vidur too wants to leave for vaanprastha so does Kunti .

Yudhishthira pleads them to wait until coronation ceremony, but they have their reasons. Dhritarashtra says he was blind but he could visualise Yudhishthira would look very nice as Maharaj ot Hastinapur.

Next scene shows Coronation of Yudhisthir and Draupadi as Maharaj n Maharani of Hastinapur. Gandhari blesses them so does Kunti.. Krishn assists Kulguru Kripacharya with Aarti, Tilak, and then he places the crown on Yudhisthir n puts Tilak. all shouts Chakravarti Samraat Yudhisthir ki Jai ...

Yudhishthira then gives his adresss to the kingdom.  He keeps three seats vacant reminding them of Bheeshm pitamah, Guru Dronacharya and Angraj Karn .
He bows before Krishn, Bheem is the Yuvraj, Arjun is his Pradhan Senanayak and Nakul nsehedev will be The Pradhan angrakshak for Maharaj.
he assures the citizens his life was dedicating to the kingdom, he assures there was going to be a future of development and peace n prosperity. They should not look back n keep pondering what they have lost but look ahead n move on . He gives citizens the right to speak when they feel injustice was don’t to them.
Dhritarashtra, Gandhari, Kunti and Vidur come dressed in white clothes devoid of Ornaments.

Gandhari asks Draupadi to forget the past n make new beginning. She takes Draupadi to Jeyshtha pitashri.
Draupadi apologises to Dhritarashtra. But he says he was guilty for the death of her sons, his own sons, n numerous deaths , he had failed to prevent her insult . Draupadi pleads them not to leave their children n go away. She wanted to do seva and  wipe out all the accusations against them. Dhritarashtra is moved n accepts her offer n blesses her .

Bheeshm realizes that now his Hastinapur was in safe hands , he meets Pandavas after coronation of Yudhisthir, Krishn also comes to meet Bheeshm n he is very pleased to see all their faces . Bheeshm praises Krishn for his blessings n is grateful to him.
Bheeshm looks at Yudhisthir and declares Chakravarti Maharaj Yudhisthir ki Jai ho !!
he now wants to go to swarg Lok ..He was free of all duties of his matribhoomi .He had lived all his life a slave to his own pratigya . Vidur tried to divert his attention towards the kingdom but he always remained bound by his pratigya n remained tied to the throne.

Arjun gets emotional at the thoughts of losing Bheeshm . Bheeshm advises them never be bound by any pratigya . Bheeshm gives them advise on good governance n how to be good Raja ... parivartan n samriddhi. The women should always be respected as much as the borders of the kingdom. Both should be protected n respected .

Never think of dividing the kingdom ..Bheeshm had committed that crime..he divided the kingdom just to avoid war.
Krishn puts Matribhoomi ka Tilak on Bheeshm as per his wish n he seeks permission to depart . Bheeshm prays for Ample sunshine, rain n greenery n crops for this motherland .. the rives N lakes remain Full the administration remains strong . Saying this Bheeshm leaves for heavenly abode . Pandavas get emotional at this point.

Krishn visualises Gods showering flower petals on Bheeshm . They all pay respects to the body of Pitamah.

Time eternity takes leaves form narrating the story of Mahabharat . It leaves the future to carry on based on the Mahabharat n avoid injustice ..Adharm ... learn n proceed From darkness to brightness.. adharm to dharm.. Akram to Karm ..this was the path to Mokhsa.

The serial ends with Krishn blessing everyone . 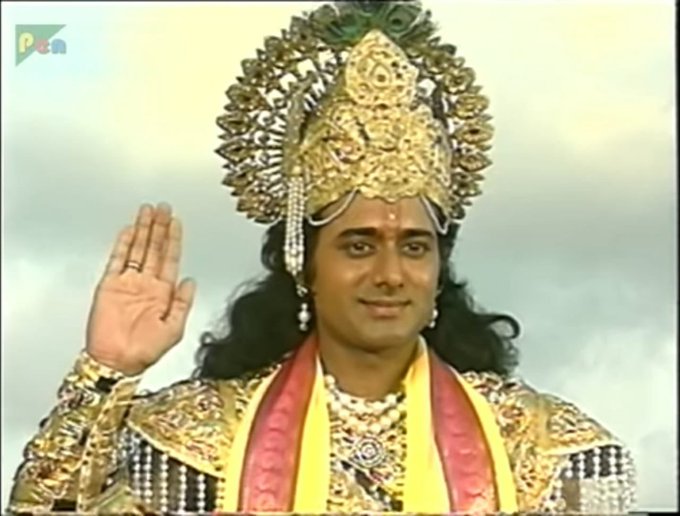 I am so happy Krishn was always  on Pandavas side.

Edited by vijay - 2 months ago
2 Likes this
REPLY QUOTE

What a great ending of this Mahagatha .🙏

Edited by Sutapasima - 2 months ago
4 Likes this
REPLY QUOTE

Thanks for the update. Seriously I don't remember watching this scene of Dhridastra's final try to kill Bheem. Never liked the guy, always did and supported the wrong throughout his life especially when it comes to his sons' wrong doings, just coz he was robbed off his rights to thr throne by his brother Pandu and his kids. Man what a pain of a man.

I remember watching this show in my childhood in Doordarshan in 96-97s. Great to have a re-watch like this now two decades later.

Thanks for the update. Seriously I don't remember watching this scene of Dhridastra's final try to kill Bheem. Never liked the guy, always did and supported the wrong throughout his life especially when it comes to his sons' wrong doings, just coz he was robbed off his rights to thr throne by his brother Pandu and his kids. Man what a pain of a man.

I remember watching this show in my childhood in Doordarshan in 96-97s. Great to have a re-watch like this now two decades later.

Thanks for sharing you views ...

Dhritarashtra is the worst character in Mahabharat, he failed in every aspect in his life ... all others are grey ..this guy is totally BLACKKK .

Edited by Sutapasima - 2 months ago
1 Likes this
REPLY QUOTE

Thanks for sharing you views ...

Dhritarashtra is the worst character in Mahabharat, he failed in every aspect in his life ... all others are grey ..this guy is totally BLACKKK .

Edited by Sudharies - 2 months ago
2 Likes this
REPLY QUOTE