~Welcome to the Priyanka Chopra FanClub!~

only i will open the next fc(s) pm me if an fc finishes, if i dont reply soon then pm the ppl in red(in the member list) ONLY

no bashing of members or priyanka

Priyanka was born on July 18, 1982, in the Chopra family consisting of her dad, Dr. Ashok and mom, Dr. Madhu (nee Akhauri), and has one younger brother. Her dad is Punjabi-speaking, while her mom is from Bihar. As a child, she suffered from Asthma and was very close to her dad. Her family affectionately called her Mimi. She started her education at La Martinire Girls College in Lucknow as a resident student; a short stay at Maria Goretti College in Bareilly prepared her for further studies in the USA. Having completed tenth grade in Boston, Massachusetts, USA, she decided to become a software Engineer or a Criminal Psychologist.

She enjoys Indian music and dance; flair for writing poetry and short stories; reading, especially biographies; and has worked for a lot of social-welfare programs. She aims for the stars after completing her education. She is a movie buff and would love to join the galaxy if a good offer comes.

While she was born in Jamshedpur, Jharkhand, she also spent her childhood in Rae Barreilly, in Uttar Pradesh as well as in Lucknow, where she was enrolled in the La Martiniere Girls' School. These frequent re-locations took place as Ashok was a doctor in the Indian Army. She subsequently re-located to the U.S. where she studied in Newton's Newton North High School and then in Cedar Rapid's John F. Kennedy High School in Massachusetts and Iowa respectively.

In 2000 she returned to India and enrolled in Jai Hind College and Basant Singh Institute of Science in Churchgate, Bombay, but had to leave abruptly as she was crowned Miss India. She was subsequently crowned Miss World in the same year - a year which proved to be a year for Indian Beauty Queens - as Lara Dutta and Dia Mirza were also crowned Miss Universe and Miss Asia Pacific respectively. Ironically, beauty pageants are banned in India's conservative state, Uttar Pradesh.

After completing her responsibilities as a Beauty Queen, she first appeared on the tinsel screen in India in a Tamil movie 'Thamizhan'.

After winning the Miss World title, Chopra became an actress. She made her debut in the 2002 Tamil film Thamizhan alongside Vijay, in which she also sung playback, before moving on to Bollywood. In 2003, her first Bollywood film, The Hero: Love Story of a Spy released and won her good reviews.Despite being given a below average status, the film went on to become one of the highest grossing films of that year.

Her next film, Andaaz opposite Akshay Kumar was a success, earning her a Filmfare Best Female Debut Award and a nomination for Filmfare Best Supporting Actress Award.

Her next few films performed poorly at the box office.

In 2004, her film Mujhse Shaadi Karogi was released, and became the third highest grossing film of that year.

Her next release, Aitraaz, was a Hindi remake of the Demi Moore vehicle Disclosure. It was her first "negative" role, where she played the villain. Her performance won critical acclaim and earned a Filmfare Best Villain Award. She also received a second nomination for Filmfare Best Supporting Actress Award. In the same year, she participated in a world tour titled Temptations 2004 with several of Bollywood's leading stars, including Shahrukh Khan, Saif Ali Khan, Rani Mukerji, Preity Zinta and Arjun Rampal.

In 2005, several of her films were released, though most did not do well at the box office.

In 2006, Chopra starred in two of the most successful films of the year - Krrish and Don - The Chase Begins Again.

Nikhil Advani's ensemble piece, Salaam-e-Ishq: A Tribute To Love was Chopra's first release in 2007. The movie failed to do well at the box office. Chopra's next release, Big Brother also underperformed. Her other releases in 2008 included Love Story 2050, God Tussi Great Ho, Chamku and Drona, all of which were considered flops. However, her most recent releases, Fashion and Dostana, have succeeded at the box office, and her performance in the former garnered her critical acclaim, winning her the Filmfare Best Actress Award as well as numerous other awards.

Her recent film 'Kaminey'' also with Shahid Kapoor in which she plays Sweety a Marathi girl was a big hit and her performanced was critically acclaimed.
Later this year she is going to appear in Ashutosh Gowariker's What's Your Raashee? and Jugal Hansraj's Pyaar Impossible. She has also signed Sanjay Gupta's Chamki Chameli
Beauty contest winner 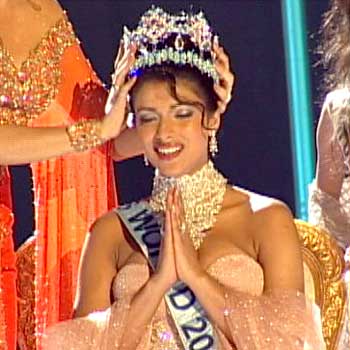 Mini Filmography
It all started with winning the title of Miss India World and later winning the coveted Miss World 2000 title. She was the fifth Indian woman to win the Miss World crown and the fourth Indian woman to win it in a span of seven years. Priyanka made her acting debut with the Tamil film Thamizhan and the following year she made her Bollywood debut with Anil Sharma's The Hero: Love Story of a Spy. Her first commercial success was Andaaz for which she won a Filmfare Best Female Debut Award. She was the second actress to win the Filmfare Best Villain Award for her critically acclaimed performance in Abbas-Mustan's Aitraaz. Priyanka later went on to deliver commercial success with films like Mujhse Shaadi Karogi, Krrish, Dostana, Fashion, Kaminey etc. In 2008, she won the Filmfare Best Actress Award for her performance in Fashion.
Personal life

Born in Jamshedpur, Jharkhand to Ashok Chopra and Madhu Akhauri, both of whom are doctors, Chopra spent parts of her childhood in Bareilly, Uttar Pradesh, Newton, Massachusetts and Cedar Rapids, Iowa. Her mother, a Tamil-Malayali-Kannada-Telugu from Tamil Nadu, comes from a Kayastha Bihari family settled in Jamshedpur, while her father, a Punjabi-Bengali-Marathi, comes from a family of Punjabi origin, settled in Baraeilly. She also has a brother, Siddharth, who is eight years younger than her. Since her father was in the Army, her family frequently moved.

Winner of the Miss India and Miss World beauty pageants in 2000.

Achievements: she is the only Indian in the USA to have been selected at the state level for the National Opus Honor Choir, extensive charity work back in India and the USA, and joined the CAF and CII in their literacy program and is their ambassador. Member of the support group for the Thalassemic children in U.P., India, participated in the adult education awareness program with the non-governmental organizations in the peripheral areas of Bareilly, joined the Indian Government-sponsored Polio Eradication Program as a volunteer. Raised funds for the destitute in Boston, Massachusetts, USA, by participating in a church program.

While shooting the song "Do Me A Favor, Let's Play Holi" in the movie Waqt: The Race Against Time (2005), she stepped on a live wire and received a shock. She was hospitalized for a day.

Did her schooling from La Martinire in Lucknow. She completed tenth grade in Boston and wanted to become a software engineer or a criminal psychologist.

Her father Ashok Chopra, who also manages her career, was diagnosed with a tumor in his liver. He had to undergo a complicated emergency surgery.

Has a younger brother.

Turned down a part in London Dreams (2009) because she could not provide the shooting dates as she was busy with other films.

Appeared on the cover of the premiere issue of Maxim magazine, Indian version, released in 2006.

She has won awards for 3 of her films andaaz, aitraaz and fashion, and is currently known as 'the best actress in bollywood.'

"I fail to understand why people would think I got a raw deal out of Krrish (2006), considering I was present all through the film, from the beginning till the end. And I don't know where people get off really. 'Krissh' has done a business of Rupees 150 crores. It's popular and is almost giving 'Superman' a run for its money, so what more convincing is required to get the point across? I'm very happy with the response I got fro the film. I'm happy with my role. I've learnt that you can't always please everyone in any case. And 'Krissh' is my moment of success; I will not allow anyone to take that away from me." (Stardust magazine, September 2006)

Once I knew I wasn't going to be doing Umrao Jaan2006), I completely disconnected from the film. And I cannot compare myself to Aishwarya Rai.

When I became Miss World, I couldn't believe I had won it. I used to sleep with my crown because I was scared someone would steal it. In a minute the world changed for me. (July 2007)

I'm lucky. I don't know whether I'm deserving or not. All I know is that I work damn hard for everything. And God helps those who help themselves. Every day is like an exam. I believe destiny and hard work go hand in hand. I was studying to be an engineer when my mom and my brother sent my pictures for the Miss India contest. I didn't even know about it. If that isn't destiny, what is? (July 2007)

Most outsiders look at the film world as something glamorous. But no one sees the hard work that goes into it. I haven't taken a holiday in the last four years. I'm working 25 hours a day. There's no time to sleep or to eat. (July 2007)

When asked what sets her apart from other actresses: "I don't come from a film background. I haven't learned anything about films or film-making. But I have a thirst to know everything about my profession. I want to learn about cinematography, about editing, about music recordings, about post-production. So when people in the know talk, I willingly listen. Also, I'm not scared of working 20 hours a day."

I got into the movies by accident. When I got an offer, I thought let's try this too. Everything in my life has happened by trial and error. I didn't even think I would win the Miss India title so where's the question of thinking I'd come this far. (July 2007)

I thoroughly believe in the institution of marriage, but there's still a long way to go before I get married. Right now I want to concentrate on my career.

I adore watching movies; movie marathons are my favorite pastime. I can watch up to five movies back to back. I also love music and like reading whenever I get the time

Edited by KatForeva - 9 years ago
6

Edited by KatForeva - 9 years ago
5

PS: Please do not post before the FC maker is finished with the first page.
Edited by KatForeva - 9 years ago
1

Hey you link is not working on the old FC