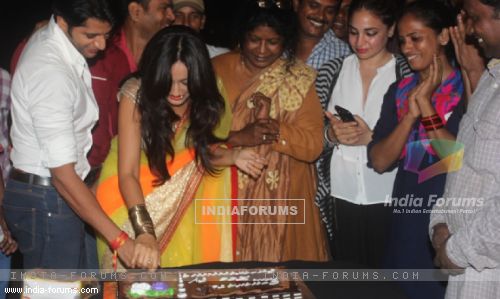 4 Lions Films' popular show Qubool Hai on Zee TV has garnered lot of attention and is ruling the hearts of the viewers. The show is captivating the eye balls of the viewers through its interesting storyline and various twists and turns in the story.

The cast and crew is elated as the show completed the successful journey of 500 episodes. Well, the show which saw the debut of Surbhi Jyoti as Zoya and now Sanam was appreciated for her performance and sizzling chemistry with the former Asad (Karan Singh Grover) as well as with RaQesh Vashisth.

As the show headed towards a leap, the main protagonist of the show was replaced and Karanvir Bohra as Ahil stepped in as the lover of Sanam. Their chemistry is becoming popular day by day. Even the antagonist Amrapalli Gupta as Tanveer is being loved by the masses too.

Shalini Kapoor seen as Dilshad in Qubool Hai shares her happiness of completing 500 episodes with the show says, "I still remember my first shoot for Qubool Hai was with Karan Singh Grover which Gul Khan herself has shot. I keep telling everyone that 4 Lions Films' is the best to work with. In the start we had not expected that we will complete 500 episodes. We have put our best efforts and full hard work since the beginning which has turned out beautifully. We went through many ups and downs but still we could stand up in the mind of our viewers. My journey has been fantastic and wonderful in the show. Now I want to take up the show which has similar character like Dilshad for me."

TellyBuzz wishes a hearty congratulations to the team of Qubool Hai!

kajenfan4ever 6 years ago
Karan Singh Grover wishing you all the success you deserve with your movie and stay blessed always.

FaultInMyStars 6 years ago Karan Singh Grover and Surbhi Jyoti...hats off to you! You guys rocked as AsYa! The whole cast and crew of QH was amazing, especially Shalini Jee, Alka Kaushal and Neha! ...heartfelt thanks and good luck to all of them!

RehanlovesSeher 6 years ago Half of sorrows we earn by expecting good things from wrong people;
And the other half of sorows we earn by finding wrong things in good people.
Good Morning! Surbhi Jyoti AND congratulation on Completion of 500 episode. Shivani_4u 6 years ago Karanvir Bohra...
Waiting for ur scenes in QH :)

KritiOnIFforKSG 6 years ago Karan Singh Grover i love you like crazy...QH was worth watching only coz of u