View Profile
Saturday’s episode has a very special theme. This particular episode has been dedicated to pay tribute to the showman of the millennium, the great thespian – the one and only Raj Kapoor, on his death anniversary which falls on the same day. The episode kicks off with a medley sung by Aditya, the participants and the mentors. One by one all the contestants give their performances Gharana wise. They get their share of praises and criticisms both. 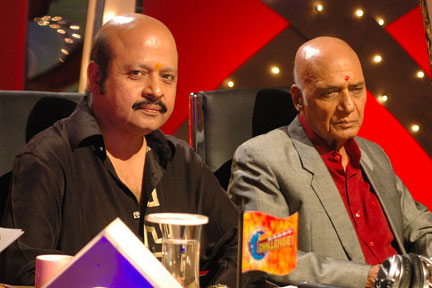 Featured Video
Himesh compliments Bappi da for his excellent selection of singers since his Gharana has the maximum number of talented singers. To which Bappi da gives his famous quote "Yeh Vishvayudh hai. Jab World Cup hota hai, tab Ranji trophy koi nahi dekhta".
Meghna Verma from Vishal Shekhar's Gharana and Tushar from Himesh Reshammiya's Gharana get eliminated. Himesh makes a promise to Tushar that he would make Tushar record one of his favorite compositions in future. He hums the composition on stage for all to hear. On this Ismail Darbar congratulates Tushar for getting a promise of a break despite being eliminated from the show .
Author: Barnali

15 years ago expecting a lot out of sallu from this movie...hope its interesting

15 years ago i watchd dat episode...it was a rocing episode nd must say HR is too gud ..now he is goin t gave break to Tushar..

+ 3
15 years ago Thx for the article!
iMust say i atotally agree! Bappi has the best singers in his Gharana!!

Well i have to wait some days before i can see the epi!
Thx again

15 years ago thnx for the article...
really lookin fwd to it..