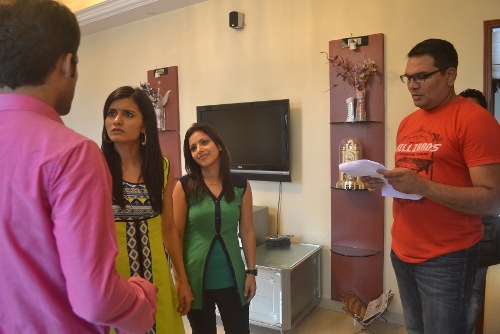 Roping in some of the best experts in the industry to hone the talent of the contestants on the show, Zee TV his leaving no stone unturned to make this season of India's Best Cine Stars Ki Khoj bigger and better than ever before.

Visiting the sets a few weeks ago was Bollywood photographer Avinash Gowariker who shot mock movie posters with the contestants. Teaching them the nuances of facing a camera and helping them get their body language right, Avinash surprised the kids with the outcome. The stunning movie posters ended up had the judges and the contestants themselves bowled over â€¦ they had no idea they could look so good!

The contestants were also trained by acting guru Kishore Namit Kapoor, who has trained biggies like Hrithik Roshan and Priyanka Chopra. Having taken an acting workshop from the master himself, the contestants had a chance to polish their acting skills and being natural in front of the camera. To enhance their dancing skills, the contestants were trained by choreographer Mudassar Khan, who gave the contestants tips on how to make themselves more graceful, charismatic and engage the audiences while they perform on stage. This apart, the contestants fitness regimen is looked into by expert dieticians and their workouts at the gym are desgined by professional trainers to ensure they look like stars at all times!

This week, the contestants shot a special thriller sequence with Lalit Marathe â€“ Writer & Director of various Bollywood and Marathi movies. While the actors have so far explored genres like comedy, dance and crime, this week they were given a challenge of stepping out of the sets and going to real locales where they shot a 10 minute thriller story which was written and directed by Lalit. Having changed their looks and given them characters that are poles apart from what the contestants are like in real life, Lalit ensured that he got the best out of each of these contestants.

Talking about his time with the contestants, Lalit said, â€œI was quite impressed by the contestants here. While in the beginning I thought it would be difficult for Okasana to pull the act off, it turned out that she managed very well. She was a complete surprise package. Apart from Okasana, I felt Sonam and Akshay were fantastic too. I wish the contestants all the luck for this is just the beginning of their journey.â€