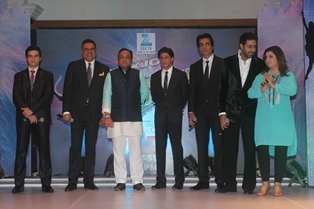 When 13 year old l'il Bheem taps his feet, snaps his fingers with a big grin on his face and moves like no one's watching, he isn't exactly the embodiment of perfection. He is, perhaps, more a comedy of errors, if anything. But one thing's certain - He does put a smile on your face because he's dancing straight from his heart. Ditto for Minal's kitty party gang of middle-aged housewives from Karad, nurse Nora John who serves patients round-the-clock and dances behind closed doors because that's the one thing that makes her happy and the senior citizen's club of Mumbai who can put any youngster to shame with their spunk and energy. They have just a few things in common - a complete lack of inhibition, an ability to not take themselves too seriously, lose themselves in the moment and celebrate their own imperfections while spreading their inner joy as they dance seedha dil se ...!

Zee TV, with its landmark franchise Dance India Dance, celebrated India's passion for dance, making it nothing short of a religion across the country! Having scaled the pinnacle of brilliance in aesthetic, skillful dancing with DID, Zee TV now introduces India to yet another home-grown format ... a genre of dancing that calls out to every Indian to brush aside considerations such as technique and training, just let their hair down and dance straight from the heart! Partnering with India's biggest superstar Shah Rukh Khan's Red Chillies Entertainment & ZEEL's creative and production studio Essel Vision Pvt Ltd, Zee TV brings viewers the biggest entertainment extravaganza with the hottest celebrity panel ever - Maruti Suzuki Alto K 10 Dil Se Naache Indiawaale Co-powered by Askmebazaar.com & L'Oreal Paris Fall Repair 3X'.

Dil Se Naachein Indiawaale will be India's first ever multi-city dance tour in search of the happiest dancer! Conducted through a joyride on a special Happy Dancing' bus, the tour will reach Mumbai, Delhi, Ahmedabad and Indore in the coming days with a star-studded panel called the Agents of Happiness' comprising none other than Shah Rukh Khan, Deepika Padukone, Abhishek Bachchan, Farah Khan, Sonu Sood, Boman Irani and Vivaan Shah. Dil Se Naachein Indiawaale, as a platform, calls for entries from dance enthusiasts across the length and breadth of the country to send in their Happy Dancing' videos and the shortlisted dancers will win an opportunity to showcase their acts in front of the Agents of Happiness'.

Punit Goenka, MD & CEO, ZEEL says "Dil Se Naachein Indiawaale is Zee TV's biggest Diwali extravaganza, introducing India to an all-new genre of dancing. The core idea is to spread happiness across the country through dance. We are pleased to partner with Shah Rukh in bringing this proposition alive. True to Zee TV's positioning of Umeed Se Saje Zindagi, the show brings hope into the lives of countless dancers across the country who haven't had the privilege of formal training. You don't need to be flawless and technically brilliant in order to be appealing as a dancer, sometimes all it takes is a lot of heart!"

Shah Rukh Khan said, "For our film, Happy New Year, we wanted to move away from the conventional format of city tours where we only get to spend a few minutes talking to the crowd in a mall or a movie theater. This time we wanted to go out there and thank them by entertaining them and giving back the love they always give us. When Zee approached us with the concept of a show that celebrates the sheer happiness of dancing as against selecting the most trained and technically sound dancers, it instantly appealed. The concept also holds well with our film. This will be our unique way of promoting our film in different cities. It gives all seven of us - Farah, Deepika, Abhishek, Boman, Sonu, Vivaan & I - an opportunity to reach out to everybody in India who unknowingly respond to any rhythm or music. All of us will be performing and judging in this show. The idea is to spread cheer and happiness wherever we all go!"

While audiences await the launch of this exciting property, it has already created quite a stir amongst the advertisers' fraternity, with Maruti Suzuki Alto K 10 coming on board as the title sponsor and Askmebazaar.com and L'Oreal Paris Fall Repair 3X stepping in as co-powered by sponsors. Zydus Cadilla, Nerolac, Liberty Shoes and Vicco have come on board as Associate Sponsors.

With the hottest celebrity panel ever on Indian television, an all-new genre of dancing and the first-of-its-kind dance tour with a mission to spread joy and happiness across the country, Dil Se Naachein Indiawaale, promises to be the biggest entertainment extravaganza this Diwali!

6 years ago i really loved this dance show...
please Zee network.. i would like to see this show in the next year too..
itz fun to watch happy dance...