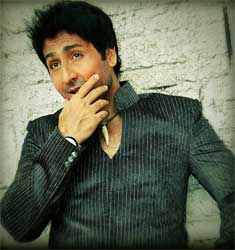 Festivals are like seasons in our country before we just rest back winding up the earlier merriment, the next is already on its way. So before Mumbaikars get out of the eventful Janmashtami festival we thought of having a sweet conversation with Nand Baba aka Zeb Khan, who enacted the role of Lord Krishna's father in Colors popular show Jai Shri Krishna.

Zeb Khan who was recently seen enacting the negative role of Vikram Aditya in Colors' Ganga, retrospect's his first debut role in Jai Shri Krishna and says, "My character of Nanda Baba was like a turning point in my career which got me lot of fame; also the character has actually changed me as a person, my way of thinking. I feel it has made me a good human."

Post his first mythological serial he was then seen in Imagine TV's show Meera so when inquired about his occurrence he asserted, "Though while taking up the character of Jai Shri Krishna I was a bit apprehensive as the channel and production house both were new ventures. But to my luck it did kick start well and the occurrence has been amazing; still I don't aspire to continue with mythological shows because as an actor I believe in experimenting with my talent. Yet I'm always open for a lead role in same genre."

When enquired whether he had any special agenda this Janmashtami in a calm tone he replied, "Yes my co actor who enacted the role of Yashoda and I were invited as guest for a Janmashtami festival but we couldn't attend it due to our personal commitments. Though I don't belong to Hindu religion but I truly believe in its rituals and respect them truly."

So wishing him all luck for his future.

karishmamalhotr 10 years ago ZEB u r the best n finest actor in the TV industry....U acted very well in Jai Shri Krishna n Meera....I hav never ever missed any single episode of the both.....recentely I saw u in Ganga.....u acted superp...I know u r very clean by heart too......i wnt to see u more in upcoming serials with Gud roles....God Bless u with all the happiness n success of life....n all ur wishes come true......luv u a lot

PunjabiKudiUK 10 years ago Loved watching Zeb in JSK and I think he was even better in Meera as Vikram!
He seems like a very tolerant guy coz he's muslim but still respects other faiths..... good luck to him for the future!

nainasahi 10 years ago oh dear..............this guy is so sweet .he is definitely a very down to earth human being. i simply loved his portayal of the village head and a doting husband/father in JSK. and although he was the negative guy in GANGA, I still cud nt help adoring his acting as VIKRAM.
ZEB, u r a sweetheart. always be good human being and pl. cm soon in a new shw.
my best wishes to you,lols.

I think ZEB shud play powerful historical roles like MAHARANA PRATAP, PRITHVIRAJ CHAUHAN OR ARJUN. He would BEFIT any larger than life character.
STAR PLUS is making MAHABHARAT .
ARE u listening ,cvs. ZEB is the ultimate choice anyday to play strong roles .
anywz, ZEB IS A FAB ACTOR, so he can do any genre perfectly,social or mytho.
Hope to see him in a new show soon.lols n lols........

abhi_12 10 years ago Awww thats nice to have this article...Lolzzz..

Before Death, SP Balasubrahmanyam Has Sung For Upcoming ...
20 minutes ago

Sushant's Family Displeased With Attention Being Diverted ...
22 minutes ago

After Ten Months Jacqueline Fernandez has Finally Re-united ...
32 minutes ago

Kangana Slams Anushka for Raising her Voice Against ...
59 minutes ago