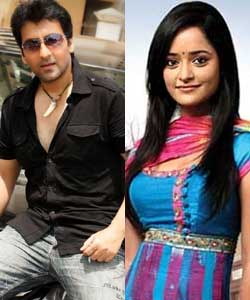 Zeb Khan and Jayashree Venketaramanan, a.k.a Sarika of Imagine's Beend Banoongaa Ghodi Chadhunga will be seen in an episodic of Imagine's Mahima Shani Dev Ki.

According to our source, " The story is loosely based on the old film Saudagar starring Amitabh Bachchan and Nutan. It is about  a greedy vendor who gets married to a widow for money and as to how Shani Dev punishes him for his deeds. It is followed by a sequence where his wife comes and helps him."

We contacted Zeb Khan who confirmed the news, "Yes, I will be seen in an episodic of Shani Dev. The story is loosely based on Saudagar. It's an interesting character with a Rajasthani look. It was amazing to work with Pradeep Jadhav on this episode. He is a fantastic director."

The episode will be aired this weekend.

espee.luv 8 years ago grt to know this , awesm news ,, im a biggg Amitji fan,,, and his movie's story is fantastic...would love to see it on the silver screen...hope Zeb and Jayshree present it nicely.

kribalaji 8 years ago Ya, the makers are trying to make the show more in sync with audience likings and taste,, the ''saudagar'' story will definitely be very interesting,,, waiting to watch it for the lead guy also ,,Zeb is a fantastic actor,,,looking frwd to watch him again on screen.

princessunara 10 years ago aww..love her so much she is jst adorable! n she has got such a lively n positive personality..
love u so much:)