For years, you have enjoyed Devang and Baba's Rap, Sapna's folk songs and Suneeta & Anaida's pop songs. You have grooved to Taz's romantic tunes, done the bhangra on Jassi & Jaspinder's hits. You have hummed popular songs sung by Babul, Kamaal & Richa Now… get set to watch all these singing superstars perform on songs, which are "hatke" from the style they are famous for! Tune in to Idea Dhoom Macha De this Thursday, February 7th at 8:30 pm and watch a special theme episode titled "Zara Hatke" only on NDTV Imagine. Tune in this Friday, February 8th at 8:30 pm to watch the first elimination episode of this exciting show!

Idea Dhoom Macha De will see eleven of India's most popular and professional singers compete against one another for the title of the country's best LIVE performer. 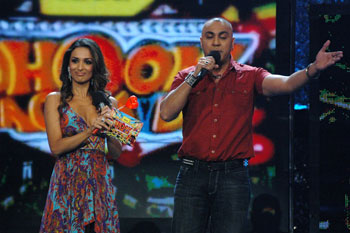 Featured Video
Says Jaspinder Narula who performed on the tapori number, Chodhna Chodhna Re, "I was very nervous and unsure before my performance, but once I got on stage, I just decided to give it my best shot! The judges and audience enjoyed it so much, that they asked me to perform once more!" Speaking about his performance, Baba Sehgal said, "I had a great time performing for this episode where all the artists were supposed to sing different genre of music! I sang 'Taarein Zameen Par' as I love the song and my son insisted I sing it!"


Sapna Awasthi who sang 'Sun Saiba Sun' said, "I really like this song and love the way it has been sung. Lataji has sung it so effortlessly and with such simplicity that I would like to salute her! As I was given a chance to perform a song of a different style, I chose Sun Saiba Sun and decided to give it my best!"

Jassi who sang a ghazal titled Apne Jeevan Ka Andaaz Nirala Hain adds, "I chose to sing this ghazal because the lyrics are very meaningful. Also, the song conveys a strong social message. I thought it was the perfect platform for me to sing this song as the message would reach out to the whole country. I really enjoyed singing this ghazal, which is very different from my usual style and felt very peaceful after the performance!" Richa Sharma added, "I have sung songs for over sixty films, but never got a chance to sing a sexy number like Raat Akeli Hain. I like this song a lot, and when I was told about the "hatke" theme, I decided to sing it! I had a great time singing this track and I hope the television audiences also enjoy it!" 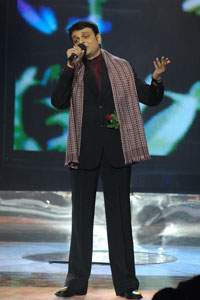 Devang Patel, who pleasantly surprised the judges with his choice of song added, "I have been a fan of Mukesh since childhood. When I was asked to sing a hatke song for the show, the first and obvious choice was one of my favorite songs, 'Kabhie Kabhie'!" Says Suneeta Rao on her performance, "I chose to sing the song 'Waqt' which is the title track from my latest album. It is a combination of Carnatic music and contemporary drum and bass. I chose to sing this song, because it's very 'me', at the same time it's something I have never done before!"

Kamaal Khan who sang 'Zihaal e Maski' says, "This is one of my favorite songs as it has a mix of Persian lyrics! Performing on it was a totally different experience for me!" Adds pop singer Anaida, "The version of Fever, which I sing in the episode, is my all time favorite number! I really enjoyed singing it!"

Babul Supriyo says, "It is a great honour for a singer to sing a good song. I chose to sing Allah Ke Bande because I personally like the rendition of the guitar in the song and this song was very well rendered by my fellow colleague Kailash Kher. Taz who sang 'Dil Lena Khel Hain Dildar Ka' says," Initially there was a lot of anxiety , as this is not my style of song , but as I am a very confident person, I went ahead and gave it my best shot. The audience response was very good and I am very happy and content with my performance.

This show is judged by Indian cinema's most versatile and talented actress, Sharmila Tagore, ace music director Shankar Mahadevan and creative whiz, renowned lyricist and script writer Prasoon Joshi. This Thursday, watch these eleven singers show you what real talent is all about, as they don a brand new avatar and surprise you with their "Hatke" performances!

Tune in to Idea Dhoom Macha De this Thursday, February 7th at 8:30 pm only on NDTV Imagine.

14 years ago Wow - great theme to make these singers step into their discomfort zone.. Pleasantly shocked by some of the song selections!

I watched the opening episode last week in parts and found Richa Sharma as wonderful as ever..

14 years ago Oh boy ...Sunita Rao was fabulous in Pari hu mai.It is a good show and try and watch it.