There is much drama brewing on the sets of Zee’s Waaris. It is reported that Yuvraj Malhotra who was getting too big for his boots got into a fist fight with a unit guy and thrashed him black and blue. An angry producer Smriti Irani wanted to fire Yuvraj on the spot, but the channel tried to resist. The buzz says that Yuvraj is quite close to some one in Zee. But the matter went out of hand when apparently Cine and Television Artiste Association (CINTA) entered the picture and it is heard that they have supposedly banned him for 10 years. 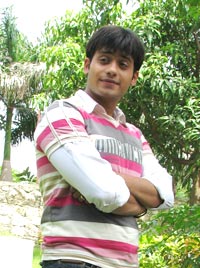 Featured Video
When we spoke to Yuvarj Malhotra about his removal from the show, he gave a different side of the story. “I am not sure if I am thrown or the character will be killed. I don’t know what went wrong,” he says.

“There was some trouble which could have been easily resolved if the production house wanted. I think Smriti never wanted me on this show as I was into the show on channel recommendation. It seems Smriti wants to have complete control over the show thus she wants to keep out the people who are recommended by the channel”.

He continues about what happened on the sets and states that, “I had been working for more than the stipulated hours. On a particular day I requested the production people to leave me early. All of a sudden, one of the guy from the production house started misbehaving and insulting me. It seems he was instigated.”

Besides that, the workers of the production house started demanding that he should quit as he doesn’t have CINTA’s artist association card. The injured worker must have complained against the beating as well, says our source.

We thought of asking few of his colleagues on this matter, who talked in terms of anonymity. While one in the cast says, “Whatever happened was quite sad, Yuvraj was quite nice, at least with the cast members”, another co actor said, “Yuvraj is usually quite rude and ill-mannered”.

If this is not enough, we also heard that Iqbal Khan may also opt out of the show. However, Iqbal denied such a thing and said, “Initially things were not in the way as it was supposed to be. But now things have improved and I hope it gets better as the days pass”.

Ajay Balwankar, Programming Head, Zee TV says, “We are aware of the situation, and have stopped him from shooting unless the CINTA thing is resolved. Accordingly the track has been changed to meet the changed circumstance”.

We tried calling Smriti and even sent her text messages. But Smriti did not want to comment on this and replied via a text message saying “No Comments”.

14 years ago i think the serial should onlygo off air....poor guy...
even iqbal should leave the show coz this WAARIS is horrible.... this was to happen one day as none of Smiriti's show did well and this is really worst...
I still wish that iqbal had never left CHOONA HAI AASMAAN and he is definitely regretting for leaving the show...
BHAGWAAN BACHAYE IS SERIAL KO.....

14 years ago thnk god this ugly guy is out...he was such a horrible actor

+ 2
14 years ago Yuvraj is a nice actor..It wud have been better if he had been in GKLB only..I feel he simply left it forr Waaris...

+ 2
14 years ago awww.. but i love this guy.. he is such a great actor.. when he first started i was like eww.. bt he has amazing acting skills no doubt about it! go yuvraj malhotra!!

14 years ago first in betiyaan and now waaris?
the way the people have acted seems like he must have done something bad.. but they don't realize how much their loosing by kicking him off.

+ 2
14 years ago aww that sucks I really liked his character and him playing it and I really hope Iqbal doesn't even thinking about leaving because I watch this show only because of him and I'm sure a lot of other people do as well!!!!!!!!!!!

+ 5
14 years ago OMG! seriously! I love Shouryas character and love Yuvraj playing him! They better not kick him off!