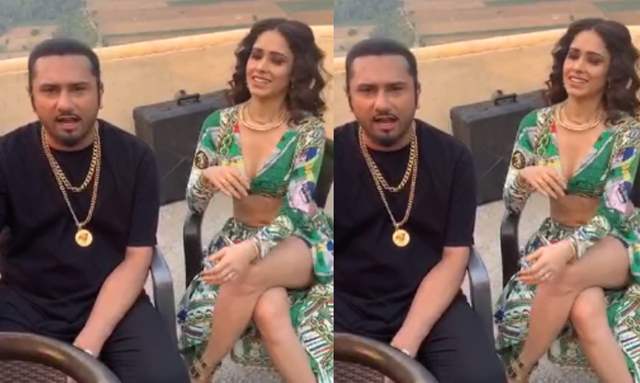 Naushrratt Bharruccha has left the audiences in awe with her simple and appealable look in Chhalaang. The way the actress is carrying the Haryanvi look with the dialect is remarkable. While the actress has always impressed her fans with her onscreen appeal, she has also delivered some extremely successful songs. Especially her dance songs with Yo Yo Honey Singh are people’s favourites.

Their song, Care Ni Karda from Chhalaang just released today and has become an instant hit amongst the audience. The song's chemistry is unmissable. But what catches our attention is that Nushrratt will be seen in Honey Singh’s next song video- the shooting of which has already begun in Rajasthan. Titled Saiyaan Ji, the will be releasing this November. Surely, it’s a special day for Nushrratt- two songs - one released and the other in the making.

Yo-Yo Honey Singh took to his social media to make this announcement. Nushrratt looks sizzling hot in the video, and we can’t wait for the magic to unfold on the screen soon. He wrote, “On the Sets of Saiyaan Ji !! Coming this November @nushrrattbharuccha”

Before Care Ni Karda, the duo also paired up for 'Dil Chori' which went on to become the most successful party song. It wouldn’t be wrong to say, that the successful pairing of Nushrratt and Honey Singh have stuck the right chord with the audience and delivered just the best. They have created magic on the silver screen with the grooviest,  peppiest music and sassy dance moves.

Apart from Chhalaang opposite Rajkumar Rao, Nushrratt will also be seen in Hurdang along with Sunny Kaushal and Vijay Verma.

Nushrratt Bharuccha shares the First Chhalaang of her life: Video