Bollywood is unanimously known for experimenting with various genres of songs. However, one would agree that those tunes with comedic effects are special in their very own right. To produce a comedy in the form of a song is like producing a mini-show within the entire movie, whether or not the movie is of that genre or not. Most versatile Bollywood actors of yesteryear are well known for trying comedic roles and have very well succeeded. Therefore, in this week's installment of Yo Mr. DJ, BollyCurry presents you with Comedy Songs of Yesteryear.
"Meri Bhains Ko Danda Kyun Maara" - Pagla Kahin Ka 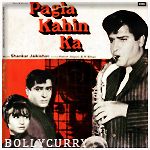 When one thinks of comedy, undoubtedly Shammi Kapoor comes to mind. This upbeat song of 1970 features Kapoor at what he does best, tickling our funny bones in the most effective way. The track was sung by the talented Manna Dey and penned by S. H. Bihari and Hasrat Jaipuri, with music composed by the Shankar-Jaikishan duo.
"Muthu Kodi Kawari Hada" - Do Phool 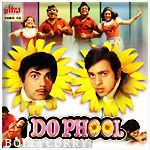 Crafted around the famous Mehmood, this hilariously peppy number was sung by Mehmood himself and Asha Bhosle. The 1973 released song features Mehmood using the funniest of means to earn a kiss from his lady love in the movie. Just the thought has us chuckling. R. D. Burman proved his worth once again with the music, as did Majrooh Sultanpuri with the lyrics.
"My name is Anthony Gonsalves" - Amar Akbar Anthony 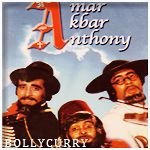 A film well known for featuring some of the finest actors of yesteryear, it was inevitable that this list would miss Amitabh Bachchan in one of his most iconic roles of his prestigious career thus far. The perky track incorporated some meaningful English lyrics - something we're not used to from the 1970s, and was well choreographed. Singing master, Kishore Kumar lent his powerful vocals, as well as Bachchan himself for this 1977 track. The lyrics were penned by none other than the veteran lyricist Anand Bakshi and the music was composed by the vivacious duo, Laxmikant-Pyarelal.
"Pag Ghungroo Baandhe Meera Nachi Thi" - Namak Halal 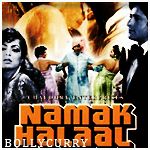 To conclude the list, this 1982 release featured Amitabh Bachchan once again tickling our funny bones as he had never done before. With lyrics penned by Anjaan and music by the talented Bappi Lahiri, Kishore Kumar lending his vocals easily made this song a chartbuster of the year. This is definitely one of the best comedic performances by Bachchan.
Going down memory lane has certainly been nostalgic as these hilarious songs were remembered with fondness. The classics of Bollywood have paved way for a variety of genres that exist now, thus this small tribute was nothing compared to the extensive list of comedic songs of the years gone by.
Be sure to let us know what your favorite comedy song is in the comments below!
Writer: Mohini N.
Editors: Amanda H. and Jenifer Y.
Graphics:  Shikha A.
Do you have a suggestion or comment for BollyCurry? Drop us a PM at  BC_Dropbox today.
7 Likes