Featured Video
The unit of Yeh Rishta is brimming with confidence and an eagerness to work harder, and with the male lead and his family being accepted well by the audience, there is much more in store for viewers. Says Rajan Shahi, "The presentation and characterization of all the characters in Yeh Rishta has been very unique and that has made an impact on the numbers. This is just the starting point as we will now dwell into the emotional journey of the couple and that is going to be a great phase".

So how does the unit of Bidaai feel, now that there is tough competition from Yeh Rishta too? "Well, I will want to replace the word 'Competition' with 'Togetherness'. Both the teams are together and stand united on the same platform. The feeling between the two teams is like, 'We have been #1 till now, today you are the #1, tomorrow will again be our chance to top'", quips the Producer.

A path breaker in terms of topping the charts, Directors' Kut is the only production house apart from Ekta's very successful Balaji Telefilms that has delivered two successful shows which have taken the top two positions on a particular General Entertainment Channel.

With this, Star Plus stands tall as the #1 Channel with 322 GRPs followed by Set Max which takes the second spot with 301 GRPs, while COLORS is the third with 250 GRPs. Star Plus has 72 GRP lead from last week giving it a distinct 29% leadership.

Ask Rajan Shahi about the journey ahead, and he quips, "This news will surely motivate the Yeh Rishta team, but this also means that our responsibilities are doubled when it comes to sustaining this success. With all humility and God's Grace, I assure the loyal viewers of Yeh Rishta as well as Bidaai that they will see many more highs coming, as far as the story lines are concerned.

Three cheers to the new leaders!! 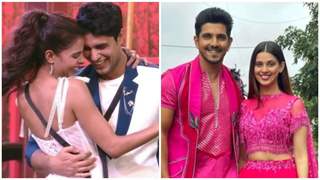 vijay10joshi 12 years ago Wow this show is really awesome!
i love the characters quite alot!
its an intresting story...i follow it on regular basis!
Deepak Dewoolkar is a pretty rare plus selective actor,last appearence in Jahan pe Basera Ho,
Watching him in this role i bet, the story and performances will achieve new heights!:)

kashish143 13 years ago wow dats a good news.
i luv watching this show

13 years ago awesome yaar.....i luv this show lyk anything......i wish loads of luck to the whole starcast of this show....NAKSH rockkssss

13 years ago Ramayan on Ndtv deserves to be no1 these days. The new adhyay is very interesting

though i dun watch it...

13 years ago great but want Bidaai to be #1 again..and it is not much difference...and with aalkeh track starting....Bidaai might be back to #1 again...