This week’s episode of Vodafone Yeh Hai Jalwa has a special treat as well as a shock for the viewers. The top three contestants, Rakhi Sawant, Ronit Roy and Hussein Kuwajerwala, had to perform on two different songs, the themes being physical exercise for the first performance and ‘kuch hatke’ for the second performance. 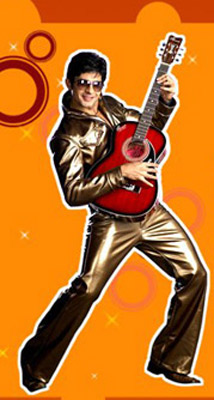 Featured Video
All three teams rendered scintillating performances with Rakhi’s Chillar Party giving an outstanding performance. This time the show will not have a celebrity guest but will see the return of host Saakshi Tanwar. While for one segment Smriti Irani and Ravi Kissen were judges, the other segment had Saakshi and awarding the teams points. This time it was Rakhi’s Chillar Party who walked away with the highest scores and the audience will get to see the dance queen in a different avatar as she performed the pole dance to the tunes of Kajra Re. The host Smriti even complimented her saying, “Though Rakhi is known for the hot and glamorous roles, she belongs to those rare breed of actors who can perform anything and everything with equal comfort.”

On the other hand, Dharmesh, a member of Hussein’s Kal Ke Kalakar struck pay dirt as Smrit Irani was touched by his story and offered him a role in her upcoming Gujarati movie. Ravi Kisen gave him the same offer as he says, “Even I have a production house, where we make films and I would be honored to work with you anytime. You are always welcome.”  Lady luck smiles on Bhawna Roy too as Smriti Irani offered to take her for her upcoming serial. Yet, in spite of all these achievements, the team that was ousted from the show this week is Hussein and his Kal Ke Kalakar, which left all on the sets in a big shock.

The elimination of Hussein from the show leaves Rakhi and Ronit vying for the position of the winner. However, is that it? Well, the show has a special surprise in store for the viewers. After rendering some scintillating performances, the eight teams ousted from the show will be seen back on stage together. And no, we are not talking about the grand finale but a wild card entry. Yes, one of the eliminated eight will be chosen on the basis of their performance and make it straight to the finale. And this team will be chosen by a special jury comprising of two judges, not thru' audience polling.

So who will make it to the top three? Who will win the finale of ’s popular dance show, Vodafone Yeh Hai Jalwa? To know this and more, keep watching the show every Sunday at 8.00 pm only on 9X

+ 2
11 years ago Never saw YHJ but the from the clips and pics that I have seen, Sakshi looked absolutely gorgeous in all her get ups!!!

u n ur team r always d winner for us..not coz v r ur die hard fans, only coz u desrve to win coz of urs n ur team's dancing skills n dwn to earth attitude....

+ 4
14 years ago The only team who deserves to come back via the wild card entry, is Hussain's team .
But as its and Ekta Channel, Prachi's team will come back and will win !! Just like Nach Baliye !!
Whatever happen, thats very unfair toward the two other finalists : Ronit & Rakhi , they are here from beginning, fighting , showing efforts ... thats unfair honestly,we cant lead a reallity show like a dailly soap, where caracters dies, come back, dies again, come back with a new face ... blah blah blah !
Plz respect games and their rules.

14 years ago in this stage wild card is un fair. i wish hussain should enter. :)

+ 3
14 years ago Only reason is I want her to go against Rakhi...it would very entertaining to see the fireworks.

I know it's probably not fair, but fans do the wierdest things to get their idol to win.

Personally, I think Rakhi is the deserving candidate who should win.

14 years ago i hope PD comes back :D
it would be fun to see Rakhi's reaction then
HAHAHAHAHAHA
sorry cant help
hehehe