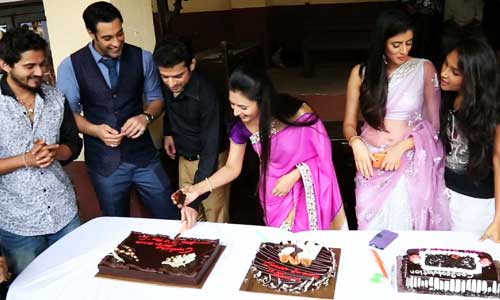 The storyline of the show revolves around the custody of Ruhi (Ruhanika Dhawan) after her parents get separated and later happiness knocked the doors in her life when she meets Ishita (Divyanka Tripathi) who later gets married to her dad Raman (Karan Patel) and becomes her mother. The story and the sizzling chemistry along with the cute nok jhok of Ishita and Raman has touched the hearts of many people and even though being aired at 11 PM, the show is able to garner good TRPs.

Ye Hai Mohabbatein has witnessed many ups and downs in its storyline which has helped the show to gain immense popularity amongst the audience.

An elated team of Ye Hai Mohabbatein celebrated their completion of 200 episodes by cutting a cake on the sets in the presence of their entire cast and crew. As seen in the pic above Ishita, Raman, Ashok (Sangraam Singh), Mihika (Mihika Verma), Vandita (Shruti Bapna) are seen rejoicing the moment with each other.

We tried contacting Divyanka and Karan but they remained unavailable to comment.

TellyBuzz wishes the entire team of Ye Hai Mohabbatein a hearty congratulations and wishes them all the best for their upcoming episodes!

zackandjosh 6 years ago Love the chemistry between Karan Patel and Divyanka Tripathi ! Both of you are my favorites and its a treat to watch onscreen... Love you guys.Keep rocking and Congrats to the YHM Team, you're doing an excellent job.

disha93 6 years ago Karan Patel and Divyanka Tripathi are the best!!!
Keep rocking in YHM

Heartiest congratulations to the entire team. Keep up the good work.