Mumbai June 5th, 2009 - Yash Raj Films ishappy toannounce the first of its much anticipated releases of this year – "". The film will be in theatres worldwide on 26th June 2009. 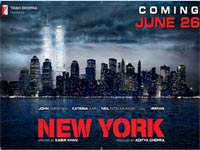 "" is a contemporary story of friendship set against the larger than life backdrop of a city often described as the centre of the world. For most of us, larger events in the world are just headlines in the newspapers but these events can change our lives... forever. "" is one such story of 3 young friends whose beautiful lives are turned upside down by larger events beyond their control.