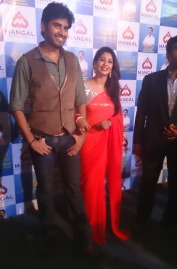 After the first elimination as Sanjeev Seth & Lata Sabrawal from Star Plus' popular dance reality show Nach Baliye Season 6 its time for another couple to bid adieu to the show.

Talented actor couple Yash Sinha & Amrapali Gupta had to say goodbye to the show this week. This week, the couple did a vampire act perfectly even after Yash had an injury in one of his hands. Their act impressed the judges and all others too but based on the judgement of last week, the couple got eliminated this week.

All our efforts to reach Amrapali and Yash were futile.

We wish the lovely couple all the best for their future endevours!

arhifan1 6 years ago wat crap!!! i m sure that finale will see gurmeet and deboina and asha and ritvik.. had hai.m they were excellent... not cool..

misty95 6 years ago They were the sweetest couple n performing so welll...I m not gonna watch nach baliye now...never

nikki.171 6 years ago Oh. I hoped they would have made it farther but well... they did great so Kudos to them ! Good Luck to Amrapalli Gupta and Yash Sinha ! You guys look lovely together.

GoldenLuna 6 years ago sad to hear...i think they deserved to b in the show..anyway all the best for the future...

ILTHBEB 6 years ago I don't get what type of show it is! I know the competiors r real life couples but with the name of dance reality show,the way channel is showing vulgarity most of the times in dance steps by couples its extremely embarrassment to watch this type reality show with family members.

-CrazySobtian- 6 years ago For me Amrapali and Yash deserved to stay till top 7 i guess. They performed much better than Raju-Shikha, Kiku-Priyanka and Ankur-Kanika. But I would like to wish them all the best for their future and they make a beautiful couple.

-stylediva- 6 years ago Iam really happy u guys got evicted from such a sucker show, ur relation gonna be strong,concentrate on ur feature projects,u both are young & good looking & talented yash amrapali, Now i can understand Y famous couples though they were free did not participate bcz it is rigged & show has no dignity & they have messed the concept to core.

Addictedlove 6 years ago Indeed its sad. They were better than kankur,rashika,kikanka.

Anurag Kashyap Clarifies His Image of 'Consuming Drugs'; ...
14 minutes ago