Purab Kohli who regards himself as a 'Directors Actor', has once again stepped into a reality format with complete positivity and enthusiasm, with the idea of just being a spokesperson and not a music gyan guru…

Here is the new host of Zee TV's SaReGaMaPa Singing Superstar in a tete-a-tete with TellyBuzz.. 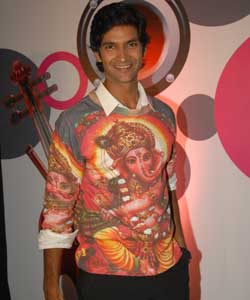 How would you express your journey as an actor?
It is definitely a journey of growth. I was just a kid when I entered the industry; I'm still a kid but a grown up kid now (smiles). In fact I have matured a lot in the past 4-5 years; I feel as though I don't have a life without acting.

But when I had stepped into the industry through Hip-Hip Hurray, I never wanted to get into it but when I met my co actors I realized that they are also just like me.

So will we hear you singing on the show?
I haven't thought of it as of now (smiles).

Post your movie Rock On, you were planning to pursue music. What's happening on that front?
I wanted to and actually I even brought some drums for myself. But I have two dogs at my place and every time I played the base drum they experienced a shiver, so I haven't been playing it now (smiles).

In your past interview you had made a statement that you are a 'Directors Actor', does that mean that you don't improvise on the script?
Yes, I go to the sets and offer myself to the director because he knows how to get the right thing out of me, mainly because I'm not a trained actor. I feel by doing that, I give more variation as an actor.

When it comes to hosting how much do you rely on script and how much on improvisation?
Well I think a bit of both. But frankly I like giving my take without script ,because if I don't read it with right expression the meaning of the statement can change. But sometimes it's necessary to have a script because if I'm a person who loves to talk and interact with people then I can go on for hours, that too with senseless talk.

What do you wish to take back from this show?
I wish I take back some good music knowledge and I really feel lucky to be part of a show like Sa Re Ga Ma Pa that has an amazing reach. I must say, no film will give me this big a reach. Also I get a chance to be around with such amazing music gurus and 18 talented singers, what more can an artist ask for.

Your favorite host on Indian Television?
I think Mr. Bachchan he has been doing a phenomenal job hosting KBC; I even like Salman Khan on Dus Ka Dum.

So who is your favorite judge among the panel?
I'll be diplomatic and say all of them, but still if I have to choose one then it would be Daler Mehendi as he is one of the best singers. And Vishal, Shekhar's compositions talk for themselves; also Sajid Wajid are no less in comparison to the others.

What kind of music do you like listening to?
I enjoy listening to all kinds of music; there's no special genre I stick to. Music is something that comes into your life and takes you into a different space and time. Presently I'm even enjoying listening to Shakira's Waka Waka.

So are you going to share some knowledge of music also on the show?
Not really, that's not my job. We already have people assigned to do that. I'm just going to use my general sense of ears, hear the songs, I either like it or don't. Also the reason being searching for a singing superstar is that they want someone who can build his/her identity in this commercial world.

Are you experiencing any kind of pressure from the previous host of the show, Aditya Narayan?
No there is no pressure as such, and they have chosen me because they wanted to try something different. I hope to succeed in delivering the variation to the audience.

Do you think a co-host would enhance your interaction on stage?
(smiles) I think I have 18 contestants to interact with, so I find no scope for a co-host. Even then I wouldn't mind a pretty girl with me (smiles).

So if you would have to choose, whom would you opt for?
Julia Roberts (laughs).

What is going to be your role as a host in the show?
Basically I'll be the spokesperson and represent the 18 contestants of the show and maintain a friendly and cool atmosphere.

On a personal front what kind of hosting do you prefer, casual or formal?
Personally I prefer casual hosting, but then at times certain kind of seriousness is expected to make the atmosphere light. I can't take away the core values of the show, so I think it would be a mixture of both.

classic_guy11 10 years ago Only time will tell if he can match up to aditya narayan. i personally feel disappointed that aditya is not hosting as i've always enjoyed him as a host.

Yuvika_15 10 years ago he is talented for sure..m sure he wil b a perfect host n mayb myt gt a chance 2 meet julia roberts---u neva knw..lol..

Nisha_90 10 years ago he is very cutee nd is a pefect host.saw his quiz show on Nat geo...gud luck purab

mpuju 10 years ago There hv nt been any amazing youth series after hip hip hurray!!! It has been the best youth series ive seen!

dormantdreams 10 years ago Awww Purab :p
awesome interview..waiting to see him host in SRGMP!! btw so agree with this part:
So how do look at the youth series that had begun from Hip Hip Hurray?
I think the youth series started and ended with Hip Hip Hurray (smiles). The shows that are being produced now under the aegis of youth series aren't satisfying to the audience.

Mandana Karimi and Radhika Apte come out in support of ...
41 minutes ago