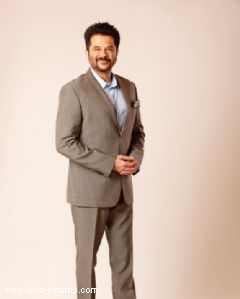 High on the success of his debut television venture '24 tele-series', a political thriller that ended last weekend, its producer and lead actor Anil Kapoor says that they will embark on the second season from January next year. He promises that the next part will be even better.

Looking back on '24 tele-series', which was beamed on Colors channel, Anil said: "When my team and I got down to making '24', we never thought it'd have this kind of an impact. But it changed television viewing habits. People, who never watched television, were hooked."

"Now we're going to start preparation for Season 2 of '24' from January. Hopefully it'd be even better than Season 1," he added.

Anil took the plunge into television after more than 3 decades in filmdom and reaped rich dividends.

From '24 tele-series' Anil flew straight to Dubai for his next feature film "Welcome Back".

Anil recounts how on Saturday, the day the last episode of '24 tele-series' was aired, he was badgered in Dubai by the entire team of Anees Bazmee's "Welcome Back" to know who the real villain of the show is.

"Dimple was after me. She kept insisting, tell, tell, tell who is the villain. I told her to watch it in the night. There was no way I was going to give out the end before the last episode was aired. Suppose someone had tweeted? My entire finale would have been f...ked," said Anil.

"I am shooting with Dimple and John Abraham again. I did two films with John in 2013 and 'Welcome Back' is my third film with him in a row. We get along very well. I've never had any problems with any co-star, touchwood," added the actor.

The year gone by has taught Anil to be positive.

"This year I learnt some more self discipline. I learnt to eat well, exercise properly and think only positively. I also learnt to be patient. That has helped me in finding my bearings even better in life.

With over 100 Hindi films to his credit and his stint in the international arena with the meaty role in Oscar winning "Slumdog Millionaire" and cameos in "Mission: Impossible - Ghost Protocol" and American TV series "24", Anil has come a long way.

Looking back fondly on his life, Anil said: "I'm thankful to the film industry and to my fans for having me around for 30 years. Time has just flown by. Today, I feel I am just starting out."

He is already planning his career moves for 2015.

"2014 would be taken up with Anees Bazmee's 'Welcome Back' and 'No Entry Mein Entry', and Zoya Akhtar's film. Then in 2015-16 I will once again be making frequent trips to Los Angeles to pursue my career there."

Anil has some solid offers from Hollywood.

"Let's see how they go. You never know with life. No matter how much you plan, something unexpected comes up," said Anil.

Panther_panja 6 years ago wow wow that would be great Anil as I just loved the season 1 of 24 serial.
You were great and the 1st season of 24 was awesome mind blowing and great also.
Just loved just loved to watch it would wait eagerly for its comeback

Haal-e-Dil 6 years ago Please come sooner. Already missing it and there is nothing watchable in TV nowadays

nehakapoor7 6 years ago wow...gr8 news... i just love this series... something diff.. thrilling..

will love to watch season2

Its the most logical show I have ever seen LOL

Did you even understand the complexity of the story?

.FemmeFatale. 6 years ago Wohooo! It was quite a good series! Especially for Indian norms,24 was like heaven!

It was a truly awesome show, eagerly waiting for season 2.

Rakul Preet Singh confesses to being a part of drug chats ...
26 minutes ago