Releasing March 21, the film is expected to bring some respite to the ticket window. Starring Anil Kapoor, Saif Ali Khan, Bipasha Basu, Katrina Kaif and Akshaye Khanna, it will also be released by UTV.

Apart from Ashutosh Gowariker's epic romance 'Jodhaa Akbar', the only film worth mentioning, which fed the box-office during this lean period, was Subhash Ghai's 'Black & White', about terrorism. The movie opened two weeks ago. 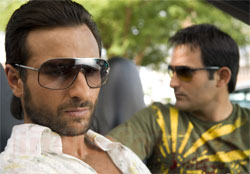 Though Ghai's movie has been critically acclaimed, it is not exactly a money-spinner for Mukta Arts. Despite being well executed and marked by Anil's sinewy performance, the film has proved to be a damp squib at the box office.

In any case 'Black & White', which in terms of its theme is unlike other Ghai productions, was not expected to be a big hit. But coming from the Mukta Arts' stable and the fact that Ghai returned to direction with it after a long hiatus, it had generated hope.

However, collections in the first week of its release were not too heartening a story.

In Mumbai, the movie could collect nearly Rs.60 lakh from 40 cinemas in the first week, which is generally not a figure one would expect of a Ghai production. There are also reports that the movie attracted poor audience in North India in spite of the tax exemption in Delhi and in Uttar Pradesh.

Though the last movie of Tips, 'Naquaab' was a box-office dud, 'Race' has prospects in the box office because it is a breezy thriller. Made on a budget of over Rs.350 million, it is also the most costly movie Tips has ever made and also the most stylistic production.

Even without taking into consideration Abbas-Mustan's expertise in the thriller genre, the cast itself should be a big draw for the movie. Anil, Bipasha, Saif and Katrina all had good box-office spells in their respective career, lately. That itself should be favourable for 'Race'.

The Taurani brothers, Kumar and Ramesh, said they had spared no effort to make the movie work at the box-office and have reportedly been well rewarded by UTV for their efforts.

Though the Tauranis had earlier negotiated a distribution deal with Nimbus, they opted for UTV as the latter offered a better deal. But they would not disclose how much the deal was worth.