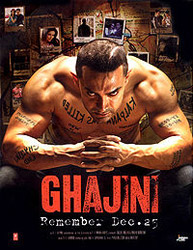 Film industry is all about creativity where plot, setting, characters etc. together brings about a final output. Some films sets milestones and gain a huge popularity among the audiences while others are average or down the line. The directors often look upon the movies that have set milestones and from there comes a ‘remake’ of the film.

Bollywood has seen remake of successful films like ‘Don’, ‘Karz’, ‘Sholay’, ‘Tajmahal’ etc. The only remake that did well was Farhan Akhtar’s ‘Don’ rest failed to captivate the attention of the audiences. The main reason behind its success was the elements of the film that differed from the original. However, the film was a remake its setting, songs, dialogues more or less possessed originality.
The latest to join in this ‘remake’ list is Aamir Khan’s ‘Ghajini’. This film is remade second time.
It is about a person who has short-term memory loss and is struggling to find his wife’s murderer. Whatever clues he sees, he writes on his body so that he can remember that.
No doubt, the story line of the movie is strong and it did well as ‘Memento’ by Christopher Nolen, ‘Ghajini’ (tamil) by Murugadoss. The question comes in here is why should one watch the same thing repeatedly. The look that actor Guy Pearce carried for ‘Memento’ the same look was copied by Tamil actor Surya and now even Aamir Khan styled himself similarly without any qualms.
Actor Aamir Khan is known for the kind of originality he presents in his films. Will this be justice for his fans if he presents them with something that is done twice before???
What do you think the similar kind of elements used in the film will be able to create an impact and fascinate audiences?