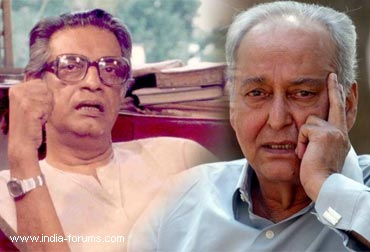 The actor and the director, the man and his muse, Soumitra Chatterjee and Satyajit Ray. A symbiotic relationship, which gave expression to one of greatest eras in celluloid creativity, still continues with Chatterjee saying that Ray "remains alive" in him, even 20 years after his death.

Chatterjee, who was awarded the Dadasaheb Phalke award for lifetime achievement this year, worked with Ray for over three decades and did more than a dozen projects with him. It's been 20 years since the Oscar winner's death, but the equation is as strong as ever, said the Bengali movie veteran.

"From the very beginning we had developed a comradeship, a rapport, knowing each other, understanding each other. I don't know what I would have done if he was not there. But I can say one thing for sure that many of my dreams would have remained unfulfilled," said Chatterjee, 77.

Their association has often been compared with the famous actor-director duos of the world such as Akira Kurosowa-Toshiro Mifune and Marcello Mastroianni-Federico Fellini.

"I couldn't have learnt so much. Even today he remains alive in me. Even today he is an inspiration for me," Chatterjee, who is the winner of 'Officier des Arts et Metiers', the highest award of Arts by the French government, told IANS in an interview.

Chatterjee said he had declined offers from Bollywood at the time as he neither would have been able to work freely nor would have succeeded in pursuing other literary genres.

"I couldn't have done recitation, theatre. The whole world knows me through Ray's films. So why would I need to go to Mumbai?" he asked.

Rated as one of the finest actors in India, Chatterjee has also worked with legendary movie directors like Mrinal Sen and Tapan Sinha.

Although the actor describes Ray as his mentor in films, it was the famous theatre personality Shishir Bhadhuri who drew Chatterjee towards acting.

"It's true that Ray is my mentor in film acting. I have learnt a lot from him. But it was Shishir Bhadhuri's acting that attracted me towards this art. After watching his acting I had decided that I will do only this. My ideas towards life have also been nourished by him," he said.

Apart from Ray and Bhadhuri, the actor said he is also grateful to Sinha for helping him understand the art.

Asked about the difference in the technique of working of Ray and Sen - with whom he had worked in films like "Aakash Kusum" and "Pratinidhi" - Chatterjee said: "There was a lot of difference. Mrinal Sen writes very well which is of great help to actors."

Chatterjee feels his unquenchable thirst for perfection not only eggs him on as an actor but also drives him to work more even at the age of 77.

Chatterjee, winner of the Lifetime Achievement Award from Italy, had turned down the Padma Shri award in the 1970s. In 2001, he refused the national award in protest against the National Film Awards committee's 'biased' attitude. But later, in 2004, he received Padma Bhushan and in 2008 the National Award.

The versatile man - known for his brilliance as an elocutionist, for bringing out a little magazine for decades, an able anchor in radio programmes - credits his upbringing in a literary and cultural environ at Nadia district's Krishnanagar as one of main reasons behind his success.

"We had a cultural and literary environment at home. My father was an amateur actor. During my childhood days we used to act in the plays staged at home," he said.

"My father had a transferable job. I have stayed in various districts of the state in my childhood. And then I had my higher education in Kolkata. The different shades of life in diverse locations I saw and experienced in my early days helped me a lot in my acting career," he said.