View Profile
The spunky stylish diva of Bollywood, Preity Zintawhoimmortalised the uptight 'Naina Kapur' in Kal HoNaa Ho had every reason to flash her dimples and jump around in joy.From making in big in Bollywood and working with legends 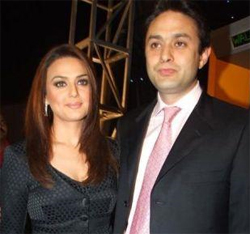 Featured Video
like Yash Chopra to taking her stand on issues and indulging in charitable causes, the zestful actress had it all.
She even found the love of her life in the businessman beta of the Wadia parivaar-Ness Wadia. The two were the eye candy of the media and had a strong relationship at hands. They went ahead and bought their cricket team in the Indian Premier League(IPL), 'Kings XI Punjab'.
But before the IPL season 2 began, things had gone sour and reports were all out in the media about the two heading for the splitsvilla- but why is the question.
Says a source, 'Ness told Preity that he wouldn't like her to act in movies after marriage'.

At first Preity was shocked and beleived that Ness had to be joking, but when she realised that this inact was his condition...she was heartbroken.Moreover, Preity did not want to lose her financial independence and security.
Adds the source, 'Preity told Ness that she would continue doing selective work, but Ness was adamant that she quit films for good.'The self-made girl that she is, she stood her ground and decided to part ways with Ness.

Well, this is not the first time that we've heard of a career after marriage being a reason for a relationship to fall apart...we can only sympathise that women still need to fight it out for their own independent standing.