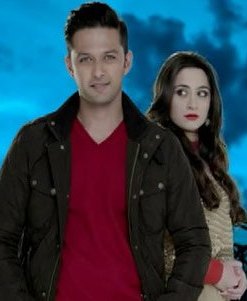 The beautiful and always cheerful, Sanjeeda Sheikh who plays the role of Durga in Star Plus show, Ek Hasina Thi is not in a good mood these days. Well nothing is wrong with her personal life but it's her professional routine what has irked the actress.


An on looker from the sets says, "These days the actress is not quite happy with the way her co-actor Vastal Seth is behaving. Vastal these days want to be perfect in each and everything he does. He is changing his dialogues by saying that its not right. Also he is taking too much time to go through the script and makes the necessary changes if needed. Due to which there are delays in the shoot and thus Sanjeeda is annoyed with this."

Little birdie adds: "This has been going on since few days now. Off late there was just one scene to be shot and Sanjeeda was to leave for the day. But Vastal trying to be perfectionist delayed the whole thing. Sanjeeda got really angry and walked out from the sets. She headed to her vanity and told the production guys that when this whole drama is over, please call her back."

There is no smoke without fire. All we can hope is that things get well between the two.

7 years ago Sanjeeda Shaikh , I love the way you are. :D Talented girl. :)

7 years ago @Tajmahal, aptly said! IF is biased towards the non actors who're only popular among hormonal teens!

7 years ago I liked all his dialogues and his voice there nothing wrong in trying to be a perfectionist.
Maybe hes planning to have a good carreer. Why she could be so.pissed of seriously.. As if hes changing her dialogues too.. Change ur attitude mam and be good with actor atleast fr ur onscrren pair

+ 2
7 years ago Who is this guy? an actor i barely seen!!! And why he wants perfection? Phele careee toh bana le phir itne nakra dhikaye perfectionist hone ka! Lmao!

+ 5
7 years ago dont care about anyone's off screen antics; Please give us news on whats gonna happen in the coming episodes. EHT rocks!

+ 6
7 years ago if she is annoyed because of this drama...than i see no wrong in her behaviour.
she is doing fab

7 years ago The same news from E24... What TB.. get something original news which is not copied from some other channel this time.
Waiting for the upcoming track of EHT

+ 4
7 years ago She being irked is justified if this is his perfectionist performance. He really needs to join acting classes.