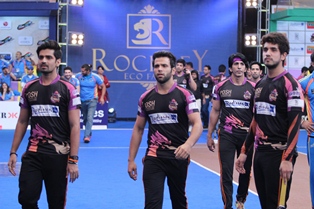 Television heartthrob Rithvik Dhanjani is known for being a happy-go-lucky person. He is usually seen cracking jokes and making everyone laugh.

So when the actor recently showcased his angry side on Sony TV's Box Cricket League, everyone was quite shocked. Here's what happened.

Rithvik and his team Delhi Dragons did not agree to one of the decisions that the umpire gave while playing against the Rowdy Bangalore team.

While Rithvik did try his best to put forth his point, it was of no use. Unable to take it anymore, he vented out his anger by abusing on field. Everyone around were taken aback to see the otherwise cool dude in such a foul mood! Well all we can say is - take it easy dude!

6 years ago Hey he's still the coolest buddy ever!!
Of course ,everything has a limit!!!any1 could have done d same if he wld hv been on his place

+ 2
6 years ago Rithvik Dhanjani - you're a cool dude regardless!!!

6 years ago Rithvik Dhanjani you are awesome!! Love yaaa!!

6 years ago Rithvik Dhanjani, keep rocking. DD is the best Team in BCL.

6 years ago Rithvik Dhanjani,your team is best team of BCL

6 years ago Rithvik Dhanjani & the rest of Team Delhi Dragons are all awesome players! Looking forward to seeing them play the remaining BCL matches.