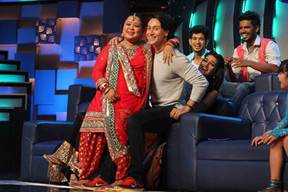 It's time to pull up your collar and put on your dancing shoes as the 'Heropanti' stars Tiger Shroff & Kriti Sanon will entertain the audience with their cool moves on Whistle Baja' & Pappi Song' this weekend on Dance India Dance L'il Masters Season 3. Promising to be a roller coaster ride of fun, laughter and dancing this celebrity special episode is not to be missed on Saturday, June 7th at 9pm.

Adding an extra punch of madness with her wisecracks, comedienne Bharti Singh will co-host this masti-packed episode with Jay Bhanushali. Making a smashing entry, Tiger Shroff left the audience awestruck with his flexible moves. Later, he was joined by his co-star Kriti Sanon whose aerial entry with fireworks was equally stunning!  The star cast was joined by the Masters, Skippers and the contestants on stage as they matched steps on the peppy song Whistle  Baja' from Heropanti.

Tiger who floored everyone with his Heropanti, was himself left speechless when he witnessed the incredible swagger of the L'il Masters, their edgy dance moves and most importantly, their kick-ass 'bachchagiri'! Skipper Sanam & whiz kid Hardik rendered an amazing performance with a jaw dropping aerial act which received a standing ovation and the coveted Nataraj' statue from Master Ahmed Khan. Paul & Sadhwin drew thunderous applause for their lyrical hip-hop act. Skipper Swarali & Lady Don' Aditi entertained the audience with their stupendous jazz performance.

Shayari king Sachin Choudhary who usually impresses the female celebrities with his romantic couplets, this time threw a challenge to Tiger Shroff to match his steps...Tune in on Saturday to find out who wins the challenge finally!

The audience was left in splits when Bharti claimed that she is in love with Tiger and kept flirting with him, which made him blush a beetroot red! Jokingly, she even mentioned that Jackie Shroff is her father in law and she would like to marry Tiger and have lots of kids with him. Sending ripples of excitement amongst the women in the audience, Bharti asked Tiger to take off his shirt but the comedy queen herself fainted looking at young actors perfect 6 pack abs on stage! One can't say no to Bharti if she requests for anything with her cute smile, so when she asked Master Ahmed to do a special rain song with her on the iconic Pyaar Hua Iqraar Hua', he readily agreed and did an impromptu jig with her...

On their visit to DID Lil Masters, Tiger & Kriti shared their experience with a huge smile, "These kids possess exceptional dancing skills and unwavering dedication towards dance. We are glad that we could experience this level of perfection today. Without a doubt, we enjoyed sharing the stage with them. And we're still reeling under the effect of Bharti Singh's antics ... she's adorably cute and so funny!"