View Profile
As a child, Bollywood star Abhishek Bachchan was awestruck by Zeenat Aman, so much so that he 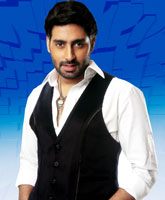 Featured Video
went and asked the 1970's trendsetter if he could sleep with her.

Abhishek used to love accompanying his father Amitabh to outdoor shoots and he especially enjoyed it when he got the chance to go with his dad for the shooting of 1983 film "Mahaan" that also starred Zeenat Aman.

On the forthcoming episode of Farhan Akhtar's chat show "Oye! It's Friday", the junior Bachchan reveals how crazy he was about Zeenat, said a source.

"On the show, Abhishek recalls an incident wherein all members of the film's cast and crew were having dinner. He spoke about how, when Zeenat-ji left after finishing her dinner and was going back to her room to hit the bed, he asked her if he could join her and sleep with her in the room," added the source.

Though he had a hearty laugh recalling the incident, Abhishek apologised for it and also said that it was his sheer innocence at that time.