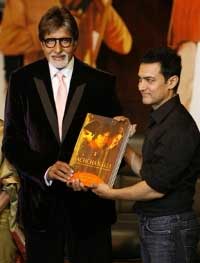 Amitabh Bachchan and Aamir Khan may have a mutual admiration society and both may bond with each other superbly, but as a child the 'Ghajini' star never thought that Big B would make it to the top.

Aamir, who is riding on the success of his latest film 'Ghajini,' made this disclosure at the unveiling of the latest book on the megastar titled 'Bachchanalia' here Saturday evening.


Aamir said that since he was born into a family of filmmakers, talks at home were mostly about films and film stars of those days.


'So, we kids at home would also discuss films and even our housemaids would put in their 'knowledgeable' remarks,' he said.


He recalled that in 1970 Filmfare magazine had devoted an entire page on those who were struggling to make it big in films and had their photographs.


'We all huddled over it, and from their looks in the photographs, we tried to predict who could make the grade in films and who would not. While pouring over the photographs, when we came to the one with an emaciated face, we kids and our housemaids had a hearty laugh and I mocked at the photograph, saying 'Inko dekho. Ye bhi star banana chahata hai!' (Look at him. He also wants to be a star!),' Aamir said and continued coyly: 'And that unlikely hopeful was Mr. Bachchan.' 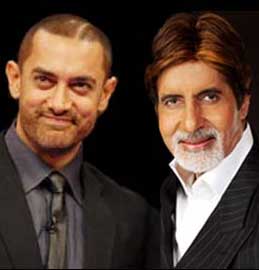 His revelation evoked a roar of laughter from the gathering. Amitabh, who was sitting besides his wife Jaya, son Abhishek, daughter-in-law Aishwarya Rai and Samajwadi Party leader Amar Singh, laughed the loudest.


Aamir said that Amitabh could reach the superstardom by dint of his sheer talent alone and he deserved every bit of his success.


'In the film industry today, there are a number of success stories, but most of them are fake. We are yet to see anybody in the industry scaling the height as Mr. Bachchan has done on the strength of his talent alone. Perhaps, nobody will,' he said.


'Bachchanalia', the pictorial book, with accompanying text, covers the almost four- decade-long journey of Big B as an actor. Written by journalist Bhawna Somaiya, the book has been published by Osian. It was released at Tata Theatre in the National Centre for Performing Arts (NCPA) in south Mumbai.