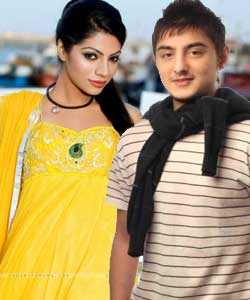 The month of love is just passing, where in few television actors do confessed their love in public, where in few are those who still wants to play the hide and seek game.

One of such couples is Tanvi Thakkar and Aditya Kapadia.

Yes, you have heard it right! Tanvi Thakkar last seen in Baba Aiso Varr Dhundo and was also a part of Saas Bina Sasuraal has been buzz of getting along with Aditya Kapadia of fame Just Mohabbat these days.

A source informs, "Tanvi Thakkar and Aditya Kapadia are seeing each other. They met through their first show together Sasuma, which is on its verge to go on air soon. They are seen together almost all the time and recently they had even went for a long trip to Lonavala."

We contacted Aditya Kapadia and he states, "We are just good friends and nothing else is happening and not only  Tanvi but I have been going out with my friends too."

Tanvi Thakkar had her own story, "I don't know who is spreading such rumours in the industry as we are just good friends."

The 'term 'Good friends' is getting too old to hide the truth guys!

+ 4
8 years ago I'm guessing that Tejashree Bhopatkar and Sharat Kumar are an item? After all, if 2 people are 'good friends', they must be thinking of marriage to each other, right?

+ 2
9 years ago considering their shooting their first show together... obviously they're bound to be seen together!

is tanvi thakkar going to return to sbs? i mean they left that track without any notice...

^^What if this IS the truth? Jesus!

+ 5
9 years ago *sigh* Sasuma. TB, can you like PLEASE give some news on Mohit Sehgal's Kehti Hai Tumse Yeh Khamoshiyan?