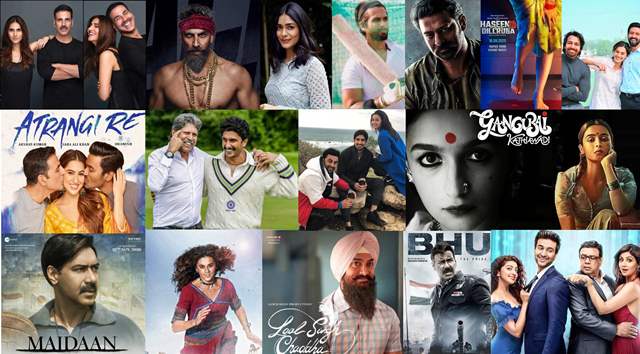 2020 had been difficult, the Hindi film industry hopes that 2021 will prove to be  better for all stakeholders including the audience. The pandemic may have sprung up unprecedented challenges in the way of screening films but with cinema halls reopening, makers and avid film goers anticipate happier times at the theatres.

Bellbottom: This Pooja entertainment production was in news for becoming the first Bollywood movie to start and finish shooting amid the COVID-19 pandemic in 2020. Directed by Ranjit M Tewari,  the spy thriller film  stars Akshay Kumar with Vaani Kapoor, Lara Dutta and Huma Qureshi. The film is scheduled to be released on 2 April 2021 and promises a slick narrative, great action and never-seen-before locations in Scotland and London. The espionage thriller recreates the eighties and its teasers have excited viewers with its note perfect detailing and retro vibe.

Bachchan Pandey: This Sajid Nadiadwala production is directed by Farhad Samji and stars Akshay Kumar, Kriti Sanon and Jacqueline Fernandez in lead roles. The film is about  a dreaded gangster who  aspires to be an actor and is  scheduled to be released on 22 January 2021.

Brahmastra: Produced by Karan Johar , Brahmastra is a lavishly made fantasy film written and directed by Ayan Mukerji. It stars Amitabh Bachchan, Ranbir Kapoor, Alia Bhatt, Mouni Roy and Nagarjuna Akkineni in pivotal roles and will serve as the first film in a planned trilogy. The film is scheduled for release in standard formats, 3D, and IMAX though the release date has not yet been specified .

Jersey: This sports drama is directed by Gowtam Tinnanuri,  produced by Aman Gill and Dil Raju and is a remake of the 2019 Telugu film of the same title. It stars Shahid Kapoor as a cricketer  with an ensemble cast  comprising Mrunal Thakur, Pankaj Kapur and others.  The release date of the film has not yet been specified.

Laal Singh Chaddha: This adaptation of the 1994  film 'Forrest Gump,' is a comedy-drama directed by Advait Chandan and is helmed by Aamir Khan Productions and Viacom18 Studios.The film stars Aamir Khan in the titular role with Kareena Kapoor as his romantic lead, Vijay Sethupathi in his Hindi film debut  and Mona Singh in a pivotal character. The film was in the news for having been filmed in more than 100 Indian locations and is scheduled for release during Christmas 2021.

Rashmi Rocket: This sports drama film is directed by Akarsh Khurana and produced by Ronnie Screwvala, Neha Anand and Pranjal Khandhdiya. The film features Taapsee Pannu in the lead role, alongside Priyanshu Painyuli and Abhishek Banerjee. The film traces the trials and tribulations and ultimate triumph of a female athlete. Taapsee Pannu is reportedly training hard to play the role convincingly. The release date of the film has not yet been specified.

Maidaan: This  biographical, period film captures the  golden years of Indian football from 1952–62.  It stars Ajay Devgn as football coach Syed Abdul Rahim who changed the fortunes of the Indian team.  Directed by Amit Sharma, the film is produced by Zee Studios in collaboration with Bayview Projects LLP.  The film releases worldwide in cinemas on Dussehra 2021, in Hindi, Tamil, Telugu and Malayalam languages, and is  Devgn's first pan India acting initiative.

Initially releasing on 24 March 2020, Sooryavanshi was postponed due to  COVID-19  and will now possibly be screened in the first quarter of 2021.

Gangubai Kathiawadi: After Padmaavat, Sanjay Leela Bhansali's next magnum opus Gangubai Kathiawadi is one the films you can't afford to miss in 2021. After back to back hits by Bhansali, this film based on Indian mafia queen is one of the most anticipated projects of 2021. Actress Alia Bhatt will be seen helming the titular role. The film is being produced by Bhansali Productions & Pen India Limited

Atrangi Re: After his last project Zero (2018), Anand L Rai will be back with this romantic drama film which has already made quite a buzz among the audience with its on-set pictures at the Taj Mahal and the actors in a never-seen-before avatar. The fresh trio of Sara Ali Khan, Akshay Kumar and Dhanush makes this one being absolutely looked forward to. The film is jointly produced by Colour Yellow Productions, T-Series Films, and Cape Of Good Films.

This romantic drama directed by Aanand L. Rai, stars Sara Ali Khan in a double role opposite Akshay Kumar and Dhanush. Produced  by T-Series, Colour Yellow Productions and Cape of Good Films, 'Atrangi Re' will celebrate Rai's distinctive and  earthy storytelling, realistic locations and witty writing. It will be theatrically released worldwide on 14 February 2021, coinciding with Valentine's Day.

Rakshabandhan: As the name suggests, the film will celebrate the most pious bond in the world and will star Akshay Kumar in the lead. By his own admission, this film is the ‘quickest he signed a film’. Directed by Aanand L. Rai and produced by Colour Yellow Productions & Cape of Good Films

Jersey: Shahid Kapoor will be seen on the screens after a good long pause, which makes it all the most exciting. After his last outing (Kabir Singh) made a massive record at the box office, Jersey seems to be a promising watch. Directed by Gowtam Tinnanuri, and adapted from his 2019 Telegu film of the same title, Jersey also stars Mrunal Thakur, Pankaj Kapur and Sharad Kelkar. The film is being produced by Aman Gill, Dil Raju, Gowtham Tinnauri.

Salaar: An action thriller, the film will star the South sensation Prabhas and is a highly anticipated watch for the year 2021. The film is directed by Prashanth Neel and produced by Hombale Films

Haseen Dillruba: Directed by Vinil Mathews will be a language mystery thriller co-starring Taapsee Pannu, Vikrant Massey, Harshvardhan Rane. After the production was affected due to Covid-19, the film is finally all set to entertain the masses with an interesting plot. The film is being produced by Colour Yellow Productions, Eros International & T-Series Films

Bhuj – The Pride Of India: The upcoming war action drama film will see Ajay Devgn in a never seen before role. Set during the Indo-Pakistani War of 1971, the movie is based on the life of IAF Squadron Leader Vijay Karnik, who was the in-charge of Bhuj airport and reconstructed the IAF airbase with the help of 300 women from the local village Madhapar. Directed by Abhishek Dudhaiya, the film is produced T Series and Select Media Holdings LLP

Hungama 2: Even though not a sequel to its 2001 film, Hungama 2 promises to be a better and bigger laugh riot. Starring Meezan Jaffery, Ashutosh Rana, Paresh Rawal, Shilpa Shetty, Pranitha Subhash among others in a stellar cast, the movie will also mark the Bollywood directorial comeback of Priyadarshan after 7 long years. The film is being produced by Venus Records and Tapes LLP.

Major: Major, a bilingual pan India film in Hindi and Telugu traces the journey of the late army officer Major Sandeep Unnikrishnan, India’s iconic hero and National Security Guard commando ( NSG) who sacrificed his life for the nation in the 26/11 Mumbai attacks. Adivi Sesh celebrates the life of the brave officer as he plays the role of Sandeep Unnikrishnan. Cast of the film includes, Adivi Sesh, Shobhita Dhulipala, Saiee Manjrekar, Prakash Raj. The film is directedby Sashi Kiran Tikka and produced by Sony Pictures India, Mahesh Babu's GMB Entertainment and A + S Movie.

On the other hand, two newcomers are all set to make their mark in 2021:

Pranitha Subhash: After ruling Southern cinema, actress Pranitha Subhash is now moving towards impressing the audience in Bollywood. She will be seen as the female lead in Priyadarshan’s Hungama 2, which has created quite a buzz.

"My character in this series is very powerful and strong": Waluscha De ...