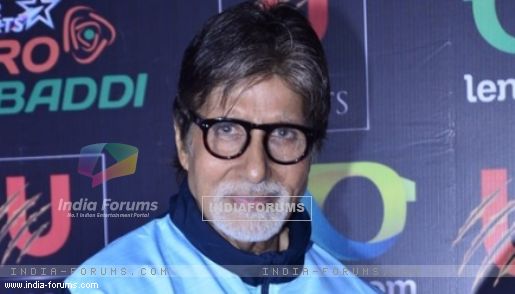 Megastar Amitabh Bachchan can play romantic roles, emote feelings of a child on the big screen or be the angry young man. But he says that for any actor, including him, it's impossible to replicate the expression on the face of a poor, starving child given food - or when this child helps someone less fortunate.

He took to his official blog srbachchan.tumblr.com to share about his experience at the traffic signal lights where he comes across children, who "are of poor means, of limited resource or none at all".

"Two young ones huddled in the middle of the night outside the platform of the local station, tired and hungry after working at getting that meal from those that travel on trains, the entire day - fruitless and without any result!" the 71-year-old shared Wednesday night.

"I once drove up to them and shook one of them up from his slumber as he lay without any covering off the pavement of the street, and gave him a packet to eat and a hundred rupee note!

"If ever I were to be capable of recreating that expression on the face of the little one, shaken up from his drowse, I would consider myself the greatest actor in the world!" wrote Big B, who was seen playing an underprivileged in films like "Muqaddar Ka Sikandar", "Amar Akbar Anthony" and "Laawaris".

The moment was "indescribable" for him. What happened next further touched him.

"The little fellow did not look at me, nor where or who was giving him this 'gift', he merely shook himself up in a frenzy and ran ran as fast as he could to another little fellow curled up in another section of the pavement, and placed the 'goods' in his hand with an expression of an achievement that I shall never be able to forget my entire life.

"The other little one I discovered later was his younger brother they had been begging for food for two days without any results! It will be impossible for anyone creatively inclined, to relive that moment on celluloid or any other 'loid'," posted the National Award-winning actor.

He said that his hand trembles as he recounts the incident and "eyes fill up voluntarily with what is commonly known as tears".

He shared another similar experience.

"And as I drive home after work tonight and entertain that young little girl on the street by my window, expectantly seeking my attention to buy those ball pens in her hand, I cannot - try as much as I can to keep away - resist asking her to hand me a few of her prized goods, pay her some money without asking what the price is, only to witness that smile, the smile of a million Mona Lisa's, lighting up her face.

"I may never use those ball pens I bought but I shall keep them close in sight ... just to be reminded of that wondrous smile on the face of that innocent beautiful little girl by the pavement," he added.