Shaan of Yash Patnaik and Swapna Waghmare Joshi's Rang Badalti Odhani on Star One identified his true talent after a long struggle and realized that business was not what he was born for.

Along with Shaan, Karan Tacker also showcased his singing talents recently and we thought that he would probably have been a singer if not an actor. But the star had something else to say about his alternate career if not an actor.

Businessmen... were not born chief executives. They were often people first.
Richard Jefferson

Karan Tacker says he would have been into garment business if not an actor. 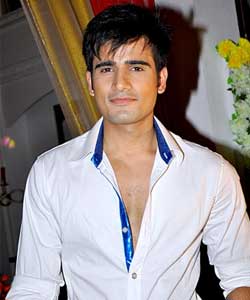 "Garment business is my family business and I would have been a businessman if not an actor. In fact I was with my father helping him at his work,  before I entered into acting. I was the one who opened the first retail shop of our business in Mumbai. I used to look after all the branches in Mumbai earlier, but once I stepped into acting I could not dedicate more time into the business and hence had to shut down all the stores. But my dad, being a super dad, was really cool about it because he always had taught me to do whatever I like."

"I joined my dad when I was eighteen years old,  and was helping him. I got into full fledged  business after my graduation. We basically have a ladies garment business."

"Personally I love to see women in Sarees and that would be my choice for women and my favourite colour is white. So the Saree could be an off white one with a golden border."

"If I was in the business and wanted to extend it, ideally it would have been in America, both North and South. I feel that there are great number of Indians out there, and Indian attires are of great demand especially for Indian weddings and other occasions."

"Even today we have a ritual at our house where the entire family sit and discuss about each others' work where I too put in my inputs about the business and dad supervises marketing ideas on my job."

"But now that I have discovered another talent of mine, I would also like to work on my singing talent and would love to give it a shot. I don't think that my family will have a problem with that because they know what each and everyone of us can and cannot do."

"I love music in general and my listening depends on my mood. If I am upset, you can see me listening to some dukhi or romantic song. My favourite singers list includes Mohit Chauhan, Kailash Kher, but my all time favourite is Kishore Kumar. I love all the songs done by Shankar, Ehsaan and Loy as well, especially the ones composed on Shah Rukh Khan because I am a big time Shah Rukh fan."

Must say, Karan is a multi-talented guy!!!

+ 2
9 years ago o boy wt if u hvnt taken d actng seriouly????we would have nt been addicted to tv

+ 5
9 years ago Karan You are simply amazing and rocks..Missing you ..come back soon

+ 5
9 years ago Karan You are simply amazing and rocks..Miss you ..come back soon

+ 2
9 years ago karan wish to see u back very soon onscreen with yashu..

+ 2
9 years ago karan u simply rock with ur expressions...