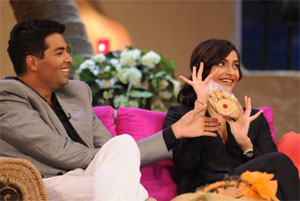 Beating the bulge or weighty issues is the theme on which Karan Johar and Sonam Kapoor reveal their secrets to host Farah Khan in this Saturday's episode of STAR Plus' Tere Mere Beach Mein.

The celebrity guests speak about their struggle being overweight. Karan weighed 120 kilos and Sonam weighed 90 kilos at their worst and they talk about how they overcame their weight problems, the difficulties they faced and also about how society puts certain conditions and pressures as far as one's physical appearance is concerned. Both share interesting anecdotes from their childhood when they used to eat forbidden things in hiding from their mothers and eat to overcome depression when their schoolmates and friends would tease and hurt them.

Sonam says, "I was depressed when I went to boarding school at the age of 15. I was the only Indian girl in my school in Singapore. There was plenty junk food and mum had stopped all chocolates at home. Here, I was free and ate though it was comfort eating and I also gained weight due to hormonal imbalances. I went from 50 kilos to 90 kilos in just 4 months. I gained 40 kilos. I used to eat 1 pint icecream, two large pizzas alone and instead of three meals would have 10 meals a day. My mum started crying seeing me."

Sonam says, "When Sanjay Leela Bhansali saw me, he said that I look like a painting from Ajanta. Don't lose weight, you have those curves." And, Farah quips, "Tum Ajanta ki painting thi ki poori Ajanta ki cave thi?"

Tune into STAR Plus, every Saturday & Sunday from 9 to 10 pm to TERE MERE BEACH MEIN

13 years ago Sonam was in Singapore..i mean studied in singapore???

i ANM LIVING HERE SINCE i WAS ONE YR OLD...

I nver knew tat abt Sonam

blossom11 13 years ago saw the episode...knew abt sonam's weight b4 saawariya but can't believe karan weighed 120 kgs...anyways congrats to both