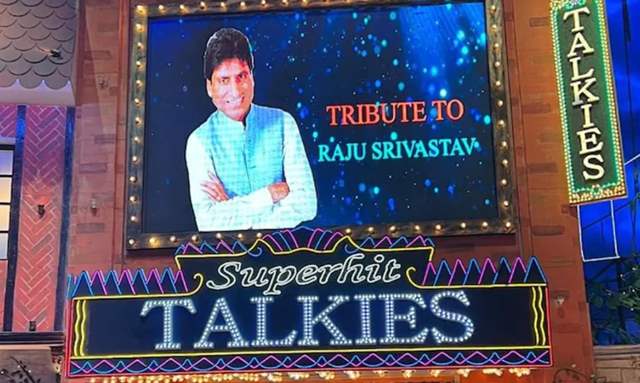 Recently, the heartbreaking news of the sudden demise of the ‘badshah of stand-up comedy’ Raju Srivastav left millions of people heartbroken. Saluting the shining star for his genius work in the field of comedy, Sony Entertainment Television’s The Kapil Sharma Show will see renowned comedians - Vijay Ishwarlal Pawar (VIP), Khayali Saharan, Ahsaan Qureshi, Sunil Pal, Rajiv Thakur, Navin Prabhakar, Rehman Khan, Suresh Albela, Rajeev Nigam, Rajat Sood, Jayvijay Sachan, Kettan Singh come together on the biggest comedy show to pay a heartfelt tribute to the late Raju Srivastav. So, get ready for a nostalgic evening this Saturday and Sunday, 8th and 9th October at 9:30 pm, as the comedians share their fond memories of the late Indian comedian, Raju Srivastav and honor him with their respective styles of comedy.

As Indian most renowned comedians gather under one roof to remember the ‘funniest man in the business’ after years, Archana Puran Singh will get emotional and will be seen missing the late Raju Srivastav. She will stand up to pay her tribute and remember her last memory with him as Archana Puran Singh shares, “When I was informed that all these famous comedians will be coming to our show, the first name that popped up in my mind was Raju, but then I realised that this is going to be a tribute to him. I have to say that I stood up here because I wanted to personally pay my heartfelt tribute to Raju. I have done numerous films with him and realized that he was a very fine actor but then he became more popular with his stand-up comedy. I think he was an actor, a stand-up and a wonderful comic talent. It is heartbreaking as we lost him too early. Just one week before he was hospitalized, he came on the set of India’s Laughter Champion and graced the Sarpanch chair. And in this very studio where the set was put up, standing on the stage he said ‘I want to live on this stage, and I find my share of happiness here. He told me I am made for comedy and if I have to leave this world then I would want to leave making people laugh with my comedy.’ So I am happy that we are paying him a tribute not with tears but with laughter and that is the only kind of tribute that Raju deserves. ”

Don’t miss watching out this beautiful tribute to the Badshah of standup comedy on The Kapil Sharma Show this Saturday and Sunday at 9:30pm only on Sony Entertainment Television!

+ 12
4 months ago We miss Raju ji a lot, he was a gem. M looking forward to see the tribute epi in TKSS.