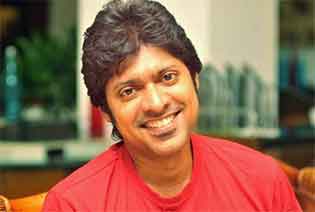 Filmmaker Magizh Thirumeni says he will present Arya, known for doing romantic comedies, in a never seen before avatar in his upcoming Tamil action-thriller "Meegaamann".

"Arya didn't go through any startling transformation because the role didn't require that. But audiences will see an Arya they have not seen before. You'll see a more subtle and manly Arya," Magizh told IANS.

"I felt Arya would be an interesting actor to carry off the role. He may not have done an out-and-out action film, but he has done films that have utilised his potential. I felt I could give him an opportunity to attempt something he hasn't done so far in his career and after working with him I have realised that he's done justice to the role," he added.

Shooting "Meegaamann" was a fun experience for the director.

"Working with Arya was absolute fun. There was nothing fake about him. I should also thank my producer for creating an ambience that made working so much fun. We as a team shot for over 100 days and we maintained the same energy level till the end," said Magizh.

The filmmaker says "Meegaamann" is a "commercial" actioner narrated from a new perspective.

"It's a typical commercial action film, but what I've tried to do is reinterpret the formula used to make such films. I've taken some liberty by adding a refreshing new perspective. I've tried to keep it logical and realistic. In the hero entry scene, you wouldn't find 10 tractors flying in the air," he said.

"'Thadaiyara Thaakka' needed a popular actor to get noticed. But I don't regret it because Arun did a fabulous job. The film was ahead of its time and I feel 10 or 15 years from now, the younger generation will see it as an Arun Vijay film," he said.

"In terms of learning, I feel if you're able to get the dates of a top hero, everything becomes easier. After that you wouldn't have problems with the money flow and when there's money, there's a lot of creative freedom as well," Magizh said.

He insists presence of a bankable hero helps in getting maximum screens when a film releases.