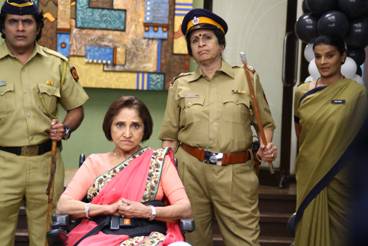 Known for her straight forward attitude and touted as the most popular villain of our television industry, the very adorable and veteran actor, Usha Nadkarni will be seen as an inspector in this Sunday's episode at 8 PM of Zee TV's Bh Se Bhade.

The veteran actress who made a special place in the hearts of the viewers with her stern mother- in- law avatar in Pavitra Rishta is reportedly extremely kicked about her upcoming cameo in Bh Se Bhade.

On her role, the actor commented, "I like to experiment and do different roles. It's fun to play different characters. I want to offer variety to my audience. My character, inspector Usha Shinde is amusing and hilarious. The exchanges that I have with Sarita Joshi (she plays Nani's character in the show) will keep the audiences in splits. The entire cast of Bh Se Bhade is a laugh riot. I had lots of fun shooting with Deven Bhojani, Sarita, Suchita Trivedi and Bhavna Khatri."

In this episode, the viewers will see inspector Usha Shinde (played by Usha Nadkarni), enter the show looking for a child kidnapper in the park.

Seeing Nani (Sarita Joshi) sitting on her wheelchair giving away chocolates to kids, inspector Usha zeroes down on Nani to be the kidnapper. She takes Nani to jail and asks her about her gang leader.

Nani, after having given up all attempts to prove her innocence, blurts out Bhade's name as her gang leader. Will Bhade be able to save himself from going to jail??

Proud-India 6 years ago She is great actress ...Like to watch her in my favorite show Bh Se Bhade.