The viewers are left with mixed reactions after watching this week’s two musical reality shows – Chhote Ustaad and K for Kishore. There were good and entertaining themes and some fabulous performances, yet they had something lacking - both the shows lacked sensitivity on Saturday and in both the shows a participant each had to face unpleasant moments that was totally demoralizing. At this stage of the show, both the incidents could have been done without. 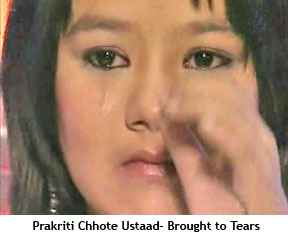 Featured Video
From this week the stage performances started for SVOI Chhote Ustaads. The participants, all of them gave rocking performances on Friday. Vyom faced elimination and he made his exit very gracefully. One shortcoming of Friday was Abhhas probing the participants guardian’s for sensational comments or emotional talks which wasn’t really required. Saturday both Aishwarya and Anvesha gave brilliant performances. While judges went generous with praise for other two, in Prakriti’s case, it was just the reverse! Kunal and Shreya, especially Kunal, was very harsh in his criticism of Prakriti after the rendition of the first song! They left the little girl visibly upset with her confidence badly shaken, which in fact has an impact on her second performance, where she was not up to the mark. The judges, made it distinctly clear on who they wanted to see in the finals. Did Prakriti deserve such a rude treatment? They could have commented on her performance but not in such a demoralizing way. Why do these judges forget that as judges, they have to remain neutral and they should inspire the participants and not demoralize them or dent their self confidence? Another point was going for the eliminations in the stage-show rounds? Getting eliminated or judged critically in front of so many people can really shake up a participant’s confidence level affecting future performances especially keeping in mind that this is a kid’s series. 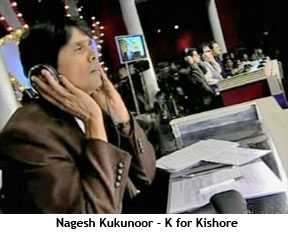 K for Kishore this week was a Rajesh Khanna special where each participant had to sing two songs of Kishore Kumar picturized on Rajesh Khanna with each song representing a different mood. Apart from that, they had to identify the song and sing two lines from the clues given by Nagesh Kukunoor in the Director’s Choice Special round. While some performed very well, some of them were not that good. Kishore Bhakt – Vinay Nadkarni’s special way of paying tribute to Kishore Kumar was a show stealer on Friday and had all those present in the sets in splits. This show is totally “Besura” as far as a fixed format goes with the format changing "Scales" or "Notes" as per whims of the producer. This week, in the director’s choice special, Arnab Chakraborty was chosen the topper by Nagesh, while the overall topper was Nayan. Apurva got eliminated this week, but the way eliminations were done and Amanat the other one in the bottom two got treated, was in very poor taste. Getting such a negative treatment from fellow contestants can demoralise anyone in such a contest. The AV on Amit Paul and the visit of his fellow participants also seemed more for dramatic effects to spice up the show and increase the TRP’s.

While last week, we sighed a heave of relief to see music rule the shows, this week unfortunately despite such brilliant performances, the behavior of some stood out like sore thumb. If this was done to generate more public interest to raise TRP’s or generate more votes, then it indeed was a very sad state of affair.

14 years ago I don't like anything in its extremity on any reality show. Too much promotion/praise of 1 contestant could, and often does, backfire and people are tired of that contestant. too much criticism is no good either. Judges can give an opinion but they should leave it at that. Don't demoralize the contestant.

+ 3
14 years ago Kunal should be ashamed of his behaviour. Thats not the way you behave with a kid. And worse was she was not so bad in her first song to get that thrashing. Then giving her Madhyam shows clearly what he was planning out. The judges were clearly favouring one particular contestant as she was all the time coming in scary land, was clearly evident.

Shreya and Kunal did something very wrong. You are judges so stay neutral. Thats not the way to behave as a judge. Just hope o all people atleast Kunal should not be made a judge in any of the kids reality show.

K for Kishore as Bhaijaan said there don't seem to any end. They are going on adding contestants. Thats a weird show. No one knows what to expect on that day's episode.

+ 4
14 years ago Of course it was necessary - how else could the three filthy fellows have eliminated Prakriti and have their two A's in the sick final of the sick show! Pathetic...

+ 5
14 years ago Ab mai kya bolo...
Firstly its really typical to talk and make simply the kids cry by touching the emotional side..

I dont think this is some marraige going on and on purpose they are tring to make dulhan crying..so that atleast people will think arrey isko rona aata hai..

Regarding K for kishore...
I feel that in the end they will not declare any one winner... coz in there format ther eis no winning post..

14 years ago I hardly ever watch SVOI, but the pther night since it was one i did. I was watching it and im like : O : O
that is horrible the way they clearly showed who they wanted in the finals that effects the votes and sinces they're judges they should stay neutral while judging i felt so bad for Prakriti, she how old? 12 thats younger than me and I couldnt handle that kind of treatment, i would quit.
These judges need to get a clue and understand that these kids, are so yuong they shuldnt be so harsh, its bad for them physocically.
&&
HEY dont be surprised if she turns out an AMAZING singer and then comes back and haunts yuo : P

14 years ago Very good article. Somehow in the end the judges come out with rude comments for the participant who is not so good. I really felt bad for prakriti. Kunal and shreya shouldnt have commented so much in front of the public. Why do they forget that it is a kids show and that they should be so biased with their votes.

+ 3
14 years ago I was so upset Apurva got eliminated, I think the judges were upset too.. I didnt like the contestants saying the names outloud, hmmm it seems like as if they're putting them down?

Hoping for a better wk now.. I like Nagesh as a judge so much, he gives really great comments and is serious in what he does!