In the upcoming episode of Indian Idol 4, the singer Alka Yagnik fills in for Kailesh Kher by joining the panel of judges for Mumbai auditions. To welcome Alka, Annu started singing “Kab maine yeh socha tha… Kab maine yeh jaana tha…” , composed by him, written by Javeed saab and sung by Alka. 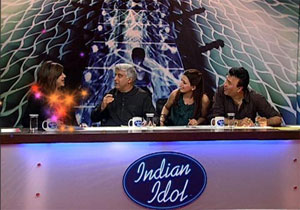 Featured Video
Well, the ambiance in the Judges' room changed quickly as a heated argument crept up...

It all started when a young girl Janki Parekh came to audition. She was confident and had her own style which impressed Annu and Sonali in the first go. But Javedsaab and Alka weren’t too sure, Javedsaab asked her to sing an earthy song instead. Janki sang a subtle Shubha Mudgal number which got her a nod from Javedsaab too... But Alka hadn’t zeroed in at her yet and she disagreed.

This triggered the open war. Another contestant, Karishma who came to audition was too nervous and uncomfortable, seeing the judges' verbal fight. This time around Alka, Sonali and Javed were in agreement and Annu chose to differ. This added fuel to the fire and the tiff got bitter when Annu commented on Alka’s judging capability and that her standard of selection had gone down by being part of other singing talent shows. Alka who was already furious, didn’t take this too well and retaliated with “It’s just not a pretty face that we are looking at, it’s a voice!”

This time the temperature scored high leaving the contestants in a miff. There is lot more to come in the coming episodes. Keep watching this space for some more masala.

+ 2
13 years ago nothing new.. anu malik fights with every judge he thinks he is the best in judging the singers..

xkokox 13 years ago why does anu malik have to always butt in??
hasnt he heard of freedom of speech

13 years ago Wow... i wish it was the original three judges, they got along so much better and not to much drama from what I remember!!

13 years ago Alka and Indian Idol? WHAT?
Now thats a shock lol

13 years ago OOOOH & one small observation.
Kab maine yeh socha tha .. was
picturised on Sonali TOO FUNNY I TELL YOU lol

+ 6
13 years ago Anu Malik needs to control his anger.