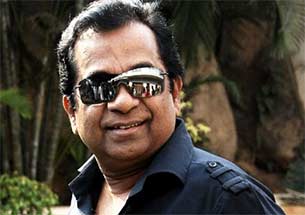 Actor Brahmanandam says he didn't help his son Raja Goutham, who had a disastrous Telugu debut "Pallakilo Lo Pelli Koothuru" almost a decade ago, because he wanted him to learn the hard way.

"I'm happy that his second film is coming out. I wouldn't be promoting it if I didn't like it. I want to see him take up a variety of roles and prove himself as an actor than a hero," he added.

"His career is in his own hands. I can only guide him because when I made my debut many years ago, I didn't have anyone to guide me. I don't want him to rely on me," he said.

Directed by Chaitanya Dantuluri, the film also features Alisha Baig in the lead role. It has music by Mani Sharma.

Ashalata Wabgaokar passes away due to COVID-19
13 minutes ago

Zarina Wahab was Tested Positive for COVID-19; Actress ...
23 minutes ago