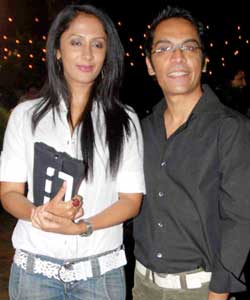 Vrajesh Hirjee, the very prominent Gujarati actor who has made a name for himself in Bollywood with his stupendous comic sense is apparently in relationship for the past three years.. The 'Girl' of his dreams happens to be Rohini Bannerjee who is presently seen essaying the role of Malti in Sony TV's Saas Bina Sasuraal.

Vrajesh was recently seen as a participant in Imagine's Zor Ka Jhatka.

When contacted, Rohini confirmed this piece of news and said, "Yes, we are seeing each other, and it has been a three year courtship now. However, I don't want to discuss more on our relationship, as this is something private".

Vrajesh Hirjee too confirmed about his lady love, "Yes, the news is true. But marriage is presently not on cards, as we are focusing on our career right now".

Finally, we get to see a couple who have 'confessed'  that they are in love!! Three cheers to them..

+ 6
9 years ago i thought her name was roshni bannerji..
but anyways, congrats to them both, they look cute together..

11 years ago Duh! Serves Sharukh rite.. just because he is an actor doesn''t mean he can throw his weight around!!!

+ 3
11 years ago what ever...
if he was shown smoking it isnt his fault its the broadcasters fault why they captured him smoking...
n ma KING is the best so darev not mess with him.....

11 years ago oh gosh i wish he would stop
i wanna see him acting longer :D