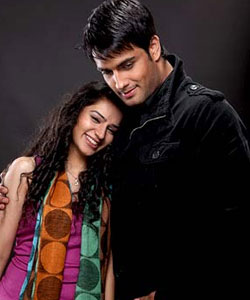 TV industry proves to be a rollercoaster for all its performers. Maintaining relations is very difficult especially if two diverse people are working together under the same roof. Some become life partners; some do not see eye to eye.

The latest instance of the latter is actors Vivian Dsena and Sukirti Kandpal who portray the popular couple Abhay and Piya of Star One's Pyaar Kii Ye Ek Kahaani.

Buzz is that the two don't talk to each other on set and the only time the cast and crew catch a glimpse of them talking is when they are doing their scenes together. The onscreen couple will openly give interviews together, but their interaction ends there the two apparently don't see eye to eye and act like strangers on the sets..

We contacted Sukirti Kandpal to hear her side of story. She says, "I am a thorough professional and don't interact much with people initially. If I like the person I will take our friendship to another level. People think that I have an attitude but that's not the case, I just don't mingle much with people and only if I am comfortable I will make them my friend."

We hope that speculations and this supposed cold war between the two are given some rest soon!

ania_1234 9 years ago oh please...this is a big rumor n nthin else...i don't believe it ...their on screen chemistry is great and that's all we fans should be concerned about

ur amazing as pia

hope 2 see u soon in another show!!

u r amazing as pia and maithli

abhaypialoveu 9 years ago U BOTH r rocking in pkyek.
keep it up.