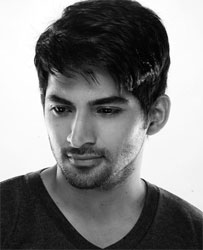 Featured Video
According to our source, "Vivan Bhatena will essay the male lead's role and will be the guy in the life of Aaraina (Lavanya Tripathi), who is the youngest of the four siblings.

When contacted, Vivan Bhatena confirms the news and says, "Yes, I started shooting for Pyaar Ka Bandhan from yesterday. My screen name is Shashank, and he is a family friend of the Punjabi family who has adopted Aaraina Rai. He is a close friend of Aaraina, who will later go on to be the love of her life".

Elaborating on his character, Vivan states, "I am a complete brat, who never takes things seriously. Basically, he is a person who has never taken any decisions for himself, and is reluctant to grow up in life. His character is very similar to Ranbir Kapoor's character in the movie Wake Up Sid".

Pyaar Ka Bandhan showed a leap of sixteen years in yesterday's episode, and tonight's episode will see the entry of Vivan Bhatena…

+ 2
12 years ago you truly ARE THE LEAD of pkb...infact 1 of the 2 reasons most people watched pkb...1 is shashank and the other prasha ..so truly take a bow vivan...shashank has been a lovely character to see..have enjoyed his growth in the show and have enjoyed watching him immensely...wil REALLY REALLY REALLY MISS HIM AND YOU....

+ 4
12 years ago You truely are the lead of PKB. Can't imagine it without you. The role of Shashank was made for you.

+ 2
12 years ago Yeayyy!! I'm so glad u accepted Pyar Ka Bandhan!! I can't imagine what PKB would have been without u.

13 years ago well...karan ain't coming in the show...so i really want shashank for prateeksha...i just think they would be way better.....both krittika and vivaan are very gud actors.....

13 years ago Aww they are so funny esp in the episode where aaraina made shashank come to her house and her dad told him off (how could he)
lol but they are so cute esp when shashank saved himself infront of aaraina's dad by saying 'dekho na uncle yeh kasie kapde phen ke aayi aasie kapade phenegi toh iske saat saat meri bhi iszat loot jaaygi lol :)

13 years ago ya ya ya please let him be lead againt lavanya n please bring karan for kritika. please ekta please...

13 years ago Their jodi is alread very cute and refreshing together! Hope to see the same freshness and candidness continued!

13 years ago him and ariyna are really cute togeather

13 years ago this show is rocking with it multi starrer