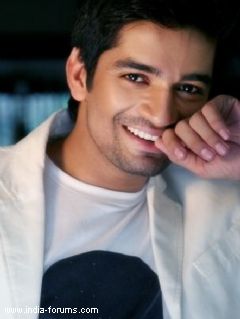 Nach Baliye's one of the most promising Jodis Vinod Thakur and Raksha Thakur, who have won the audiences heart with their amazing performances, again impressed one of the stars of the Star Parivar team who was present on the sets of Nach Baliye to perform as well as support the contestants too.

Vinod and Raksha's fire act performance impressed everyone on the sets and they not only got a standing ovation for their performance but Vinod gave one of his fans who was Vishal Singh his autograph after his act.

Actor Vishal Singh aka Jigar of Star Plus' popular show Saath Nibhana Saathiya was very much impressed with Vinod's performance that he came running after his performance; he appreciated him then took his autograph.

Vishal told TellyBuzz, "Vinod deserves all the appreciation. We have everything but still I don't think that I can perform even a bit of it whatever he performed on stage. I really adore and admire him. He is a brilliant dancer and a performer."

Vishal performed on the song of 'Radha teri chunri' along with his co-star Rucha Hasabnis and with Rahul Sharma and Ishita Dutta. When asked Vishal about his experience of performing on the stage of Nach Baliye, he added, "Today one of my dream has come true among many of my dreams. I always wanted to perform on this stage since the time I have started watching the show. It's like a dream come true for me and I really enjoyed performing here. I follow the show and if I will find my Baliye till the next season, then I would definitely love to be a part of the show."

gurti_allinall 6 years ago Gurmeet Choudhary ur last week performance was something out of d world... Waiting 4 ur nxt performance. All d best janu.

abhialka 6 years ago A song for you Gurmeet Choudhary
Its in Marathi...

tanubag 6 years ago Gurmeet Choudhary is the real super star of Tellywood. He is the most versatile actor of Indian Television Industry. Love u sweetheart.

pinkyasya 6 years ago Gurmeet get well soon.cant wait for your performance this weekend///

Sushant’s sister Shweta Singh Kriti shares a video of a fan ...
20 minutes ago

Parth Samthaan: Kasautii Zindagii Kay has shaped me as an ...
56 minutes ago