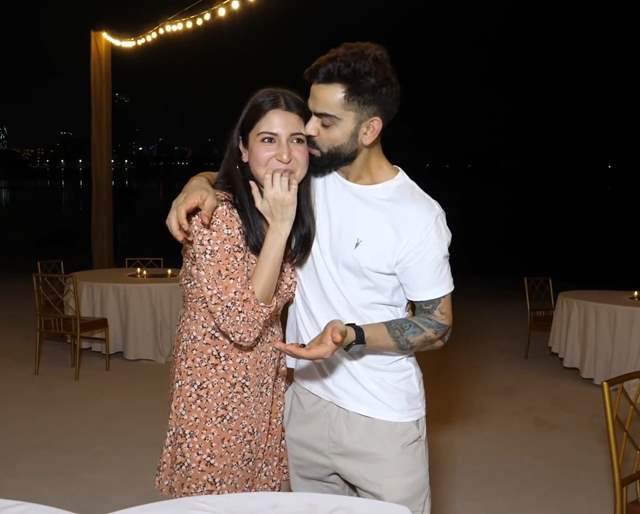 Anushka Sharma and Virat Kohli took social media by storm with their baby announcement. Two days back, on August 27, the adorable couple of cricket and Bollywood world – Virat and Anushka – took to their respective social media accounts and announced their first production together. Looking cutest as ever, the Pari actress was seen flaunting her cute little baby bump in a black and white Polka Dot dress, while Kohli opted for a plain white T-shirt.

Wishes and love have been pouring in for soon-to-be parents. As per their caption, the duo is set to welcome their first baby in January 2021.Ahead of IPL 2020, Indian cricketers are currently in Dubai for the practice of the upcoming IPL schedules.

But before kick-starting the practice, the Royal Challengers Bangalore team had a small celebration as two of its members recently shared the good news. Well, before Virushka’s baby announcement, another RCB player Yuzvendra Chahal introduced his ladylove Dhanashree Verma and announced his Roka. Now pictures and video from RCB Team’s celebrations have hit the web and we can’t stop adoring them.

We got our hands on one of the videos that see Yuzi, Anushka-Virat cutting the cake. Well, we must say we can’t take our eyes off the pregnant couple. Wearing light coloured printed dress, the actress is glowing and how. While it’s difficult to spot but her cute baby bump just can be missed. Towards the end of the video, while congratulating the couple, the team is heard saying, “Wish you many more, a cricket team please.”

Check out these pictures and videos below: