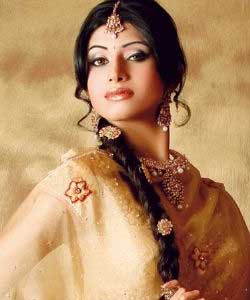 Vindhya Tiwary, the protagonist of Star Plus' Maryada Lekin Kab Tak? was put to a lot of inconvenience when she lost her purse containing money in dollars, her room key and precious camera when she was in Macau for the Star Parivaar Awards.

Our source tells us, "Vindhya had just got back to the hotel after performing for the grand event when she noticed that her purse which contained lot many valuables was missing. She immediately contacted the hotel authorities and demanded that she wanted her purse back at any cost, as she was emotionally attached to certain things that were in the purse".

While the girl was crying over the loss of her precious camera which had a lot of memories stored, the hotel staff did hunt for the person who had stolen the purse!!

Talking about it, Vindhya tells TellyBuzz, "I was terribly upset on losing my belongings. As soon as I brought it to the notice of the hotel staff, they promised to do something about it. I had just taken the duplicate key to my room and had got in, when I was asked to come to the reception area. I was excited when I got to know that they had found my purse. But to my dismay, the purse contained everything except for the camera. I argued with them and told them that they had to get my camera back. In half an hour or so, they brought the culprit who had stolen my belongings before me. He had the camera in his hand".

We hear that Vindhya was given an option by the hotel authorities to lodge an official complaint against the culprit. But Vindhya decided against it, and conveyed to them that her ethics do not give her the permission to go harsh on someone.

have-a-dream 9 years ago nice article,happy tat she got her purse back...

jiajeenesh 9 years ago gr8 that the got her stuffs back,.she was lucky enuf..!!!good going vidhya

BheegiBasanti 9 years ago Aww...glad it worked out finally for Vindhya!

mihali7 9 years ago aww tht's so sweet to know tht she dint wanna punish the culprit - man i wud've been so pissed tht i wud've made him/her pay.

SourCandyDrop 9 years ago At least she got her stuff back which is good :) I hate that sunken stomach feeling I get when I lose something. It's horrible.

lonelyshadow 9 years ago Good to hear that she got back all her belongings...:)

RadiantTreasure 9 years ago Sorry to hear that "Sashangelz"..Seems likes vindhya is lucky enough to get back her purse and camera that too in Macau..Lucky day Vindhya..Sri:-)

..-..Riya..-.. 9 years ago Lucky lass.. My camera was stolen last year in November during a fest.. After my performance, I returned to the green room and it was gone.. I never got back my precious camera, cried my heart out!

And recently, during a school programme, my purse was stolen which had money and an important ID card.. And here again, never got it back! Vindhya, u r really lucky.. Glad you found your belongings back! And shame on the thieves! Get a life!

"Anushka- Virat, I am Sure You will be Amazing Parents": PM ...
3 minutes ago

Disha Salian did not dial 100 before her death, says Mumbai ...
34 minutes ago

Nishant Malkani: I may not agree with everything Kangana ...
57 minutes ago