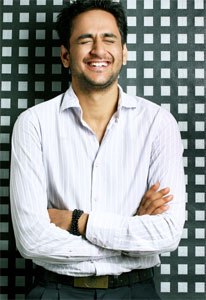 Telly Buzz had earlier reported about Vikas Gupta entering Balaji Telefilms and Star One's new offering 'Pyaar Kii Yeh Ek Kahani'. But the buzz has come to us that Vikas who was initially finalized for the show to play a pivotal role has now backed out of the show and is no longer a part of the venture.
A source says, "Vikas Gupta who had already started with the shoot for the show, walked out from the venture as he was not satisfied with the way the show was revamped number of times for making it better."

"The buzz is also that he was not at all content with the character he was essaying, because due to revamping of the show and all the characters of the show, Vikas's character was all changed and the character didn't  resembled the same as before," says Vikas.

We contacted Meet , the creative head of the show to know the reason for Vikas to walk out of the show but refused to comment as she says, "I don't want to comment on this matter right now."

We also contacted Vivian Dsena, the male lead of the show but sounded clueless about the information.

Therefore we got in touch with Vikas himself and he confirmed the news, "Yes, I have walked out of the show and I am no longer a part of the show."
Talking about the reason to leave the show he further says, "The reason was the disagreement with the show and the character. Otherwise I would like to thank the production for giving me such a great opportunity and I hope the show does well."

Let's see how does the opening of the show goes on today!

debarshi_genx 9 years ago Guys what about Misha???


Don't you think she is playing the same role that she had played in Remix!!!

arjun_karan 9 years ago completely true &gt;&gt;&gt;hats offf to vikas for handling this with so ease ..... damm u ekta and really u dont deserve good actors and hot ones too.....

MIRACLES DO HAPPEN IF U BELIEVE IN THEM

munni_rajatfan 9 years ago well done vikas. i wish rajat does the same & walks out from tere liye.

best_punz 9 years ago the show will do well it has vivian in it !! he looks like a promising actor!

-Preeti- 9 years ago thats sad .....wish him all the best for future