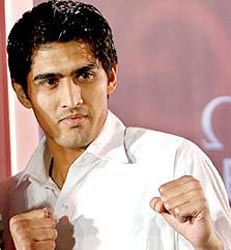 Olympic medal winner Vijendra Singh seems to be in great demand as the young lad will be seen next week in NDTV Imagine's chat show with a difference, Oye... It's Friday.

"After shaking his leg with the sexy Bipasha in Nach Baliye 4, he will be seen this week in Indian Idol 4, followed by the Imagine show next weekend, i.e. on 26th December", informs our source from the production house.

"After Bollywood heart throbs Hrithik Roshan and Aamir Khan, Vijendra will be the first sportsperson to chit chat with Farhan", adds our source.

"The shoot for the episode is over, and Vijendra had a gala time on the show", concludes our source.

It's going to be a a gala time for viewers with Aamir Khan coming this Friday, followed with Vijendra next week!!

media.analyst 13 years ago Oye, its Friday - A Recipe for Disaster- Complete Flop

Lets look at some historical data –

A format that comes nearest to Oye, its Friday will be Koffee with Karan on Star One.
In spite of having Karan Johar as a host (more popular than Farhan Akhtar) and all big Bollywood celebrity guests on the show it never crossed a TVR of 1.
The platform was Star One which is as good as NDTV Imagine or even better.

After ignoring all the previous facts & evaluation, programming team still went ahead with talk show format with Farhan Akhtar & just to give some new twist to it they added other elements to the show like foreign performers, music performances & dances. Endemol is the production house for the show and knowing the track record they would have charged minimum Rs. 25 lacs per episode. By that logic even if they produce 12 episodes it will cost Rs. 3 crores.

Once show went into production next comes marketing activities. The focus was clearly on Top 2 Metros (and they didn’t have any option also as Farhan has only Metro appeal) as majority of activities were carried on in Mumbai and Delhi. Following are few details on their marketing activities
Print (TOI – Front Flap) – Mum+Del - Rs. 57 lacs
Radio (Mum+Del+Kol) - Rs. 20 lacs
Outdoor (Mum+Del) - Rs. 75 lacs
Activation at Cafe Coffe Day
Outlets (Mum+Del) -Rs. 18 lacs
TV activity on other channels -Rs. 55 Lacs
Internet Activity -Rs. 5 Lacs

This is on the conservative side. Marketing spends can be more also.