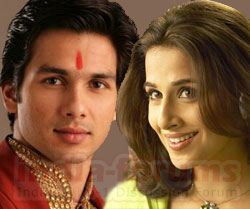 Post his break up with Bebo, Shahid is hitting the headlines yet once again. Thanks to his latest affair with Vidya Balan! Everyone is talking about it, but no one knows how it all started. Contrary to many believes that it was Shahid who was on a rebound and found solace in Vidya’s arms, it was Vidya who took initiative and got something flowing between them.

It was on the sets of Kismat Konnection in Canada. They had never met each other or interacted before. Upon that, they were supposed to shoot an extra intimate romantic scene. Needless to say, both were nervous and not at ease at all. A birdie from the sets reveals, "Shahid is an introvert and takes time to open up to people. The unit was worried because Vidya and Shahid had never met each other before. Worst it was the first day of the shoot and the scene to be shot was a romantic one."

But then our Vidya is one hell of a girl. She decided that enough is enough and she is going to break the ice between the both.

"Vidya just walked up to Shahid. "Autograph please," she said placing an autograph book before him. The move took Shahid by complete surprise and he broke into laughter. The scenario changed completely. The atmosphere suddenly seemed warm and friendly. And what's more the romantic scene was okayed in just one take," the source adds.

Vidya confirmed the incident saying, "Shahid and I had not known each other. He stood aloof and so did I. I decided to break the ice and begged for his autograph. An embarrassed Shahid did not know where to look. We have turned good friends since then."

Just good friends! We wonder if everyone is lying about them!
Featured Video