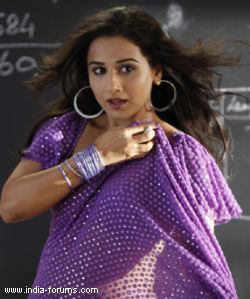 Vidya Balan who made her last TV appearance in Sony TV's Bade Acche Laggte Hai is all set for her second innings on another show on Colors.

A source informs, "Vidya Balan is all set to make a special appearance in Filmfarm Production's Uttaran to promote her upcoming movie Kahaani."

"Iccha (Tina Dutta) has come to know that Dadi has exchanged her daughters. In this sequence the actress would make her appearance,"adds the source.

Tina Dutta who has earlier worked with Vidya Balan in the movie Parineeta, would once again get a chance to share screen with her.

All our efforts to reach Tina Dutta were in vain.

9 years ago Nice to see Vidya in uttaran. Hope that will give some positivity to the story and just not to drag the already dragged story.

9 years ago correction its Nani not Dadi

+ 2
9 years ago what? tina dutta in parineeta? i didnt notice

[This show being the CRAPPIEST Ever

M Concerned for the fate of her new film Kahaani now coz UTTARAN !

9 years ago uttarn is about to get intresting then if vidya is coming:P i loved her epi in BALH, BALH rocks and so does vidya

N_sk 9 years ago As per current track it seems show is on verge of end... Anybody have any information about this? Please now nani's true face should be revealed soon... But BALH ROCKSSS