Zee TV and Drishtant Media's Aap Ki Antara is now all set to take the leap of 5-6 years which will happen coming Monday. 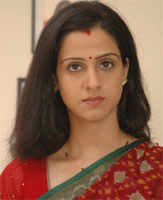 Featured Video
However, just before the leap, the show has seen a major high point in the form of Vidya (Prabhleen Sandhu) losing her kid that was growing in her womb. This miscarriage leaves Vidya devastated, and she gets into a state of depression.

From the coming week, the kids Antara, Abhishek and Billu will be seen in their adolescent phase. As reported earlier by Telly Buzz, Aaina Mehta who was earlier seen as the younger version of Star One's Shakuntala will play Antara. Sahil Deshmukh will play Abhishek while Sandeep Upadhyay plays Billoo. Sameer and Aarti's adopted kid Mili is played by Apoorva Paranjpe.

However, a major shock to the audience post leap will come in the form of Vidya's change in behavioral pattern towards Antara. According to our source, "Vidya who has gone into a state of depression after losing her unborn kid, sees Aditya as the main cause for her kid's death, and even considers him as a murderer. All the closeness that Vidya had developed for Antara before this dire incident could happen is washed off, and she feels that only if Antara had not come into her life, her life would have been different and happier".

We contacted Prabhleen Sandhu who accepted this fact, and said, "Vidya considers Antara the reason for all the mishaps that have happened in her life. Aditya and Vidya's relationship would worsen. But the only saving grace in all this is that, Abhishek and Antara share a very close bonding which will be interesting to watch".

Prabhleen informs Telly Buzz that she was almost at the verge of leaving the show, as she did not want to play mother to grown up kids. "I was contemplating to leave the show, and that is when I had a word with the production house, who explained the amount of challenge and scope that this role is offering me now. Even now, I am in a dual mind. But I am better off now, with only a 10% hope lingering in my mind to leave the show. However, I will have a word with the team and then decide. Most probably, I will continue as this show is offering me great challenges as an actor".

Aap Ki Antara will also see a change in timing, and will be aired at 10.30 PM starting 16th November..

As we wait patiently for the leap to happen, we also hope that Prabhleen stays on!!

khatriji 13 years ago it is the bogus serial.... just passing time on tv.... antara is just crap girl.. she irritates only... complete serial is crap.. soundless antara is good for nothing... 100% vella person like me dont like this serial too.. bwahahaha

+ 6
13 years ago i so dont like this leap and change in vidya's behaviour .... iwish they had continued it with the same cast n story

its so sad plot...all the bonding between vidya & antara has gone invain....

+ 2
13 years ago Sweetie, what scope are you talking about? THis is tv not the big screen.

+ 4
13 years ago thts too bad! i really liked vidya & antra's relationship. it's sad tht she changed her behaviour towards antara.

+ 5
13 years ago that is bad vidya was a good chracter, why do they have to ruin it?

13 years ago Vidya's character is treated with utmost negligence for her feelings. Aditya never explained to her about his relationship with Antara's mom. He never confided to her about his working as a sales man. Vidya should have walked out of his life because of his extra marrital affair. And to the height of all the show is always depressing to watch . Their financial situation was shown as so pathetic. How long can we watch cute dolls like kids?

+ 4
13 years ago aargh! this is stupid! i dont think i'll like this show anymore